World Photo Day is on August 19 and it celebrates the day when the French government purchased the patent for the daguerreotype process. The daguerreotype process is a photographic process that creates highly detailed images on a sheet of copper plate with a thin coat of silver. The day requires participants to share a photo of their world, which can be anything the photographer chooses. The definition of photography is quite literally “drawing the light” and British scientist Sir John Herschel came up with it in 1839. He used the Greek word phōtós, which means “light” and graphê which means “drawing or writing”.

Louis Daguerre was born on November 18, 1787, in Cormeilles-en-Parisis, France. His family was middle-class and he grew up during a time of great political upheaval with the turmoil that was the French Revolution. The revolution involved the common people versus the bourgeoisie brought on by King Louis XVI’s poor economic policies. The poor wanted to improve their standard of living, and the ruling class wanted to hold onto the feudal regime. These events often affect the arts, as it inspires artists to create work that encapsulates the era, and for young Daguerre that was drawing.

In 1800, Despite having a limited formal education, Daguerre was a natural artist and at 13 he became apprenticed to an architect where he learned hands-on the mechanics of the art and the science of designing structures. This created the foundation for his understanding of how objects were built. Just four years later, Daguerre moved to Paris to study and practice scene painting for the opera.

In the early 1820s, Daguerre made a breakthrough. He and his fellow collaborator invented giant, translucent paintings illuminated to simulate movement and other effects and it was known as the diorama. Crowds would gather and watch these displays of landscapes and colors, but in the next decade, he fell on hard times and lapsed into bankruptcy because of the costliness of his invention.

Daguerre had known Joseph Nicéphore Niépce who had produced the world’s first permanent photograph in 1825 to incorporate into his dioramas. Niépce died in 1833 and Daguerre continued experimenting with photography and his dioramas. After combining chemicals and silver plates, he came up with the daguerreotype process and patented it in 1839 as a “gift to the world”.

After this bold union, photography continued to evolve and capture moments of our lives. In 2010, professional photographer Korske Ara, founded World Photo Day to inspire people to take photos that mean something to them.

Young Louis Daguerre finds a love of the arts during the French Revolution and becomes an apprentice to an architect.

After making a breakthrough with the invention of the diorama, Louis Daguerre lapsed into bankruptcy.

The French government patents for the daguerreotype process as a “gift to the world” from France.

A Gift to the Modern World

World Photo Day is founded by Korske Ara to commemorate the patent of the daguerreotype process and to inspire others to take meaningful photos.

Who is the best photographer in the world?

Brazilian social documentary photographer Sebastião Salgado is considered by many as the best photographer.

What is the best country for photography?

Morocco is considered the best country for photography because of the lively colors found there.

What job pays the most for photography?

How To Celebrate World Photo Day

Why We Love World Photo Day 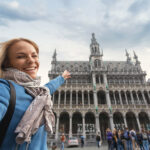