It’s time for music appreciation, only of the less common variety, on Uncommon Instrument Awareness Day, held on July 31 each year! This day is a reminder to music lovers that there are many special and uncommon instruments just waiting to be discovered. This unusual holiday encourages everyone to learn about and try a new and unusual musical instrument.

Statues in ancient Cyprus show people playing the lyre. The British Museum exhibits one such statue of a woman playing the lyre. Her dress and style indicate she was a member of the upper class. The ancient Cyprians also used animal-shaped rattles that might have been used to keep a beat, scare off evil spirits, or as a toy for young children.

The ancient Romans invented an instrument they called ‘hydraulis,’ which worked when water pressure from a tank forced air up into the keys and pipes. While playing this instrument, they needed multiple assistants to work the pumps that kept the water pressure high. Ancient Greeks were also famous for their musical celebrations. Each event — birth, death, work, and even illness — would be accompanied by music. They used an instrument called ‘auloi,’ which was a pipe made of wood, bone, or metal. Blowing into the reed inserted at the end of this instrument would produce sound.

On the other side of the continent, in Asia, Buddhists used trumpets made of different items — like conch shells — to call monks to services. The ancient Egyptians, too, had their own special musical instruments, like the harp. Examples of this are shown in scenes covering the walls of tombs. These scenes show people plucking two strings at a time, and they are accompanied by instruments that resemble lutes and oboes.

By the 12th century, many more musical instruments were invented, including a medieval instrument that resembled a guitar, called the citole. This instrument is actually the precursor to the violin, having been converted at some point during the 16th century.

Over the years, new, amazing, and uncommon inventions have increased the expansive variety of musical instruments. By the 19th century, electric instruments came around, and along with this, another unique invention. The Soviet government had sponsored research into proximity sensors. A researcher on the team accidentally invented an electric instrument that can be played without being touched. While not a commercial success initially, it has since been used in film scores, on television, and occasionally in pop and rock music.

We can trace the history of uncommon instruments around the world, but we are still unsure about who created this special day. All we know is they wished to spotlight the unusual and unique musical instruments.

Harps are played at Ancient Egyptian banquets and this is represented in scenes on the walls of Egyptian tombs.

In ancient Cyprus, a limestone statue of a woman playing the lyre is found in a shrine for the gods.

Explorers find a little rattle dating back to 300 B.C. to 100 B.C. that is used to make music, ward off evil spirits, or as a child's toy.

Considered the most elaborate musical instrument of that time, this organ only plays because water pressure forces air up into the keys and pipes.

An instrument called the citole is invented — it looks like a guitar, has four strings, and is later converted to the instrument we know as the violin, during the 16th century.

What is the rarest instrument?

One of the rarest musical instruments in the world, the hydraulophone, produces sounds using vibrations from flowing water.

What is the least common instrument played?

While not uncommon as instruments, the tuba, French horn, and bassoon are the least common musical instruments played by people.

What is the most played instrument?

The most commonly played musical instrument is the piano — almost 21 million Americans play it. This is followed by the guitar, then the violin, and then, the drums. 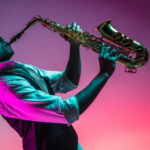