National Vanilla Ice Cream Day is celebrated on July 23 and marks a special occasion for the simple, yet all-time favorite dessert. Vanilla is traditionally made by combining cream, sugar, and of course, vanilla.  In fact, vanilla is added to other ice cream flavors as it helps to enhance their taste. Vanilla ice cream has a wide fanbase as it is the single most popular ice cream flavor around the world. The cold dessert’s subtle flavors allow you to enjoy it in a variety of ways. You can have it pressed between two biscuits, or you can enjoy it with pancakes, brownies, or cake. For the food adventurers who do not shy away from trying something new, you can even try putting it between a plain chicken/bacon burger. Vanilla ice cream was so adored that Thomas Jefferson, who is often credited with the ice cream’s popularity in America, had it served to almost every guest at the White House.

National Vanilla Ice Cream Day is an unofficial holiday so its origins are not very well-known. However, an online search reveals that it has been celebrated regularly since the year 2000. Since then, people across the country have indulged in their favorite vanilla ice cream treat on 23 July every year.

Vanilla belongs to the orchid group of family that has over 25,000 species. Being a native plant of Central America and the Caribbean, vanilla was used by the Totonacs living in Mexico. Later on, when the Totonacs were conquered by the Aztecs, the latter got their hands on vanilla. The Aztecs started using it by mixing it into their chocolate. As globalization spread, more and more people from different places started being exposed to vanilla. The Spanish took vanilla to their home country and, from there, it spread to the rest of Europe and the world. People in Britain and Spain used vanilla in much the same way as Aztecs. Vanilla in drinks like chocolate, tea, and coffee became popular. It wasn’t until vanilla reached France that it was added to ice cream.

As far as American history is concerned, the credit for making vanilla ice cream a national treat goes to Thomas Jefferson who was known for his fascination with collecting different types of recipes. It is believed that on a visit to France during the 1780s, he came across vanilla ice cream, which was a popular dessert among the French. On his return to America, he made vanilla ice cream popular among his people as well.

The vanilla ice cream recipe is no less than a national treasure for the Americans as it lies protected in the U.S. Library of Congress in Washington. Hardly two decades after Jefferson’s discovery of vanilla ice cream, recipes for it began to be published in various recipe books. Among the most popular books were those written by Hannah Glasse and Mary Randolph.

Americans became fans of this mild-flavored and creamy ice cream. However, the main challenge was that producing vanilla involved an expensive process, which made it hard to come by for many Americans. By 1841, a new technique had been discovered through which vanilla plants could be pollinated by hand, paving the way for commercial production of vanilla in different parts of the world.

Today, the world enjoys heaps of vanilla ice cream, all thanks to the invention of the ice-cream machine that made it easier to make it. Nancy Johnson made the world’s first ice cream maker that had a crank located outside. The crank addition and placement allowed for it to mix and scrape the ice cream at the same time. But before this machine became commonplace, making ice cream required much more time.

Vanilla ice cream became one of the most sold flavors due to its popularity and versatility. The market, in the modern-day, has a lot of ice cream varieties and flavors, ranging from mint chocolate and strawberry to cheesecake and cookie dough. But nothing beats the classic taste of vanilla ice cream, which is an experience unto itself.

Asia freezes its desserts using a salt and ice method that later on spreads due to Moors and Arabs.

The Yuan dynasty invents ice cream to be served at courts.

The Europeans discover the vanilla plant.

Sir Thomas Jefferson popularizes vanilla ice cream in the U.S. — not only does he serve it to all his guests at the White House, but he also pens the recipe for it.

Is vanilla a fruit or a flower?

Where does vanilla come from?

Most of the vanilla is obtained from Madagascar, an island nation situated in the Indian Ocean.

Why is there a National Ice Cream Day?

Thanks to President Reagan, we celebrate National Ice Cream Day every third Sunday in July, meaning July 18 this year. Reagan wanted to commemorate a treat enjoyed by over 90 percent of the US population.

It will most likely say on the pack if real vanilla is used to make the ice cream. But you should note that all types of vanilla ice cream are generally made with similar ingredients as they will have the vanilla flavor and will be white.

Why is vanilla ice cream the best?

Vanilla ice cream is the best because of its simple and creamy taste and texture. When added to other drinks and food items, it also works to enhance and improve their inherent flavors.

5 Facts About Vanilla Beans That Will Blow Your Mind 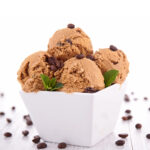