If you have siblings, you know the rivalry can get real. Middle children often get less attention from busy parents. But despite the commonly held belief that their insecurity and resentment carries on into adulthood, middle children actually develop some critical skills that help them become successful adults.

Whether or not “Middle Child Syndrome” is real, it’s true that middle children, particularly in large families, can get overlooked in the hustle and bustle of daily life. Started in 1986 by Elizabeth Walker, National Middle Child Day celebrates our middle siblings and reminds us that each child is precious and important.

National Middle Child Day is observed to honor that in-between child in the family. The interesting thing is even larger families celebrate more than one middle child, too!

Like every other year, National Middle Child Day 2021 will be celebrated on August 12th.

Middle children have a reputation for being ignored by their family, consequently growing up resentful, withdrawn, and disaffected. Although research shows little correlation between birth order and personality, the stereotype has persisted in pop culture characters like Jan Brady, who epitomizes the embittered middle child.

In fact, middle children might have some distinct advantages in adult life. The skills they develop as the “forgotten” sibling often translate into important qualities like empathy, diplomacy, and flexibility. In fact, over half of U.S. presidents were middle children, along with many other successful leaders.

Resourceful and independent but also cooperative and patient, middle children often grow up to be good leaders and helpful teammates. They can negotiate a variety of personalities but also do well on their own, and are known as risk-takers and independent thinkers. Because they’re frequently left to their own devices, middle children develop a self-sufficiency less common in their older and younger siblings.

Until the 1970s, American families had an average of 2.5 children. Today, due to modernization and economic and environmental pressures, fewer and fewer families have middle children, with the average American family having just under two kids.

National Middle Child Day began in 1986 as a way to celebrate the siblings who feel left out or unseen and give them a special day of their own. Until now, it’s been celebrated on August 12.

Middle child Teddy Roosevelt becomes the first U.S. president to win the Nobel Peace Prize for his role in the Treaty of Portsmouth, exhibiting that famous middle-child diplomacy to end the Russo-Japanese War.

Malcolm in the Middle

The hit sitcom first hits airwaves, launching a seven-season franchise about a dysfunctional family and the middle child who — sort of — holds it all together.

In "Bart to the Future", during the 11th season of the beloved animated sitcom, Lisa Simpson, lovable kid genius and eternal middle child, becomes president – the episode also predicts the presidency of Donald Trump.

Is there a national middle child day?

There is, indeed. National Middle Child Day is celebrated every year on August 12.

What personality does the middle child have?

Middle children tend to be the peace-keeper of the family and are  often considered trustworthy and sociable.

Much like other “syndromes,” the so-called Middle Child Syndrome asserts that middle children stay resentful and bitter long past childhood. Psychological studies have found no significant links between birth order and future happiness or well-being.

When is National Middle Child Day 2021?

The National Middle Child Day 2021 will be celebrated on the 12th of August. 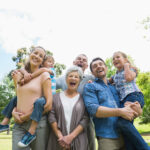