On National Julienne Fries Day celebrated every August 12, head out to the eatery of your choice and order some julienne fries. Don’t know what julienne fries are? Well, they’re just normal fries that are cut using the julienne culinary method. This means the fries are chopped into thin pieces that are almost the size of a matchstick. Why opt for the fries, you ask? Because they are classy, crispy, and taste slightly different than the regular fries served at many restaurants. So what are you waiting for? Grab a friend and head out on a fries-eating spree!

Although no one knows the origin of the julienne cut, the 1877 book titled ”Book of the Table,” analyzes its sources and links the method to the recipe of a Julienne Soup. Simply put, julienne fries are a type of French fry that have existed for centuries. In earlier times, the method of cooking was simply frying potatoes — later on, these fried potatoes started being cut into pieces of varying sizes and thicknesses.

French fries originated in Belgium and were termed ‘French fries’ because French was the language that was spoken in that region at that particular time. However, some people also believe French fries originated in 1789 in France where they were sold by street vendors. Another ‘French fries origins story’ says potatoes were first fried in Spain. No matter what the true history of the salty dish is, the fact is that fries have become a favorite of people across the world. Not only are they easy to make, but they’re also filling! No wonder Charles Dickens couldn’t help but mention French fries in his 1859 novel “A Tale of Two Cities.”

Here are more historic facts you probably didn’t know about fries: they were a dime an order in McDonald’s during the 1950s. By the 1980s, fries had become so popular that countries such as China, Belgium, Israel, Slovakia, and the Netherlands introduced vending machines that dispensed fries. The first machine of this kind was launched in 1982 in Australia. The machine called Mr. French Fry was designed to cook and produce french fries in under a minute.

Potatoes are fried and consumed in Belgium.

President Thomas Jefferson introduces French fries in the U.S. at a state dinner.

American-style fries are introduced in the U.K.

What is a julienne fry?

A julienne fry is a fry made using a culinary knife cut in which fries are cut into thin long strips.

Are French fries a julienne cut?

Yes, most French fries are a julienne cut. They are also known as shoe-string fries.

What is potato julienne?

It is a technique that cuts potatoes into matchstick-sized pieces.

5 Fun Facts You Need To Know About Fries 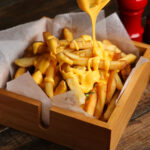