National Blueberry Popsicle Day is here on September 2. With its vivid blue color and sweet berry flavor, blueberry doesn’t get the love it truly deserves! Popsicles are great — a frozen treat made by freezing flavored liquid or juice on a stick. Curious about its history? Read on to learn more.

Popsicles are widely known as ice pop, freeze pop, ice lolly, or ice block. Popsicle is actually a brand that has become a generic term in the U.S. due to its popularity. The word Popsicle is interchangeably used with the frozen treat, and has been around since the 1920s.

Popsicles were the brainchild of Frank Epperson, an eleven-year-old boy. On a cold night in the winter of 1905, he unintentionally left a fruit drink outside on his porch, with a stirring stick in it. By morning, the ice lolly was invented. Frank called his discovery the ‘epsicle,’ which was changed to ‘popsicle’ 18 years later. Partnering with the Joe Lowe company in New York, Frank started distributing these frozen delights all over the country. The best accident ever? We think so!

Popsicles have since been a go-to treat for beating the heat in summer. Following the purchase of the company by Unilever in 1989, the Popsicle brand was created with a variety of fruity flavors to the popsicle repertoire. Although cherry popsicles are the most popular, we are team blueberry today!

Unilever purchases the rights to ‘popsicle’ and trademarks their brand.

Is there a National Popsicle Day?

Who invented the Popsicle?

We have 11-year-old Frank Epperson to thank for creating the original popsicle back in 1905.

What is the best-selling Popsicle flavor?

The most popular Popsicle flavor is Cherry.

5 Facts About Blueberries That Are ‘Berry’ Sweet! 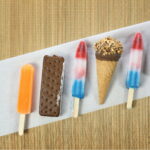