The Mid-Autumn Moon Festival has been celebrated by the Chinese since the 10th century B.C., and it has become increasingly popular since the time of the early Tang Dynasty.

There are also multiple legends connected to this festival. A popular version includes the story of Chang’e, the wife of an archer, Hou Yi. As the story goes, Hou Yi shot down nine of the 10 suns that were overheating the earth, earning a special elixir as a reward from the Goddess of the Heavens for saving our Earth. This elixir could enable Hou Yi to ascend to the heavens and become a god. However, an evil man had his eye on this elixir and visited Hou Yi’s abode when he wasn’t home. Chang’e, in an effort to protect the elixir from the evil man, drank it herself and flew to the moon with a rabbit, which she took so she would have some company there. Ever since, the heartbroken Hou Yi placed his wife’s favorite food on the table on the day of the full moon, hoping she would reappear.

Another legend changes the ending of this story, with Hou Yi going to live on the sun after his wife’s relocation, only visiting her once a year, on this day. That is why the moon is at its fullest.

The ancient Chinese start observing the custom of worshipping the moon during the Shang dynasty.

This festival becomes more and more popular in the Tang dynasty.

The earliest records of the Mid-Autumn Moon festival being celebrated as an actual festival originate with the Northern Song dynasty.

Mooncakes Appear on the Scene

The tradition of eating mooncakes during the festival begins in the Yuan dynasty.

Why do we celebrate the Mid-Autumn Festival?

Moon Festival is also known as the Mid-Autumn Festival or Harvest Festival. People gather with their families to eat and drink together, and celebrate and admire the moon.

Traditionally, there’s a three-day holiday, starting with the actual date.

How To Celebrate Mid-Autumn Moon Festival

Why We Love Mid-Autumn Moon Festival 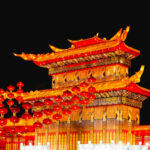