J.R.R. Tolkien Day on January 3 is “The Lord of the Rings” author’s birthday and you’re encouraged to toast him in celebration. You may remember from the story that Frodo toasts his Uncle Bilbo on Bilbo’s birthday every year. Now, over sixty years after the trilogy’s original publication, The Tolkien Society asks fans to honor Tolkien’s birth, which itself was January 3, 1892. Come up with a few words of adulation on your own, or use the official Society phrase: “The Professor!” If you want to celebrate J.R.R. Tolkien Day with a few extra meals in addition to the toast, in true hobbit fashion, Frodo would certainly approve!

Aside from the fact that “The Hobbit” and “The Lord of the Rings” directly influenced the entire fantasy genre and opened the door for the creativity of writers like David Eddings, Robert Jordan, and Ursula K. LeGuin, among many more, many critics describe Tolkien’s magnum opus as an allegory combining the horrors of World War I with the sweeping societal change of pastoral life’s gradual crumbling under the weight of industrialism. Respectively, think of the sweeping battle scenes in LOTR, and then the hazy summer of the Shire compared with the blighted, tree-bare landscape of Saruman’s domain.

The clash of these opposing worldviews and the way Tolkien masterfully depicted it, amplified by the series of Peter Jackson films and their visual splendor, make it no surprise that the Tolkien Society, founded in 1969, is still around today.

The author interacted with the Society in its early days, his assistant phoning their leadership in 1972 after they sent him a container of top-shelf tobacco in honor of his becoming a Commander of the Order of the British Empire; she said that he’d considered the gift to be the highest honor of the whole to-do.

Of course, it was the Tolkien Society that declared their commitment to publicly celebrate Tolkien’s birthday with a toast each year on January 3. So after breakfast is out of the way, along with “second breakfast” and “elevensies,” lunch, and a puff of Longbottom Leaf, have a friend over and drink to the juggernaut of fantasy fiction. The professor!

“The Lord of the Rings” is given the International Fantasy Award.

“The Lord of the Rings” is published by Houghton Mifflin in the U.S.

If ever there was a time for a sip…

Tolkien pushes back from his desk, the original incarnation of the trilogy officially finished.

“The Hobbit” is released and is honored with a nomination for the Carnegie Medal.

Is there a Lord of the Rings Day?

There’s a Hobbit Day, which falls on September 22.

How did Tolkien die?

Sadly the great author died in September 1973 from a stomach ulcer.

How old is Frodo?

Frodo is 33-years-old at the birthday party at the beginning of Lord of the Rings.

HOW TO CELEBRATE J.R.R. TOLKIEN DAY

FIVE AMAZING FACTS ABOUT THE FILMING OF THE “RINGS” MOVIES (GG):

WHY WE LOVE J.R.R. TOLKIEN DAY 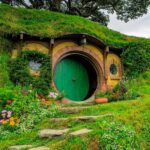