Prince could play it all — rock ‘n roll, R&B, funk, psychedelic rock, and we’re celebrating his artistic contributions on June 7. He was a prolific songwriter and penned some of our most popular contemporary hits, including “Purple Rain,” “1999,” and “Little Red Corvette.” Prince was born in Minneapolis in 1958 and lived there throughout his career. He also wrote, starred in, and created the soundtrack for the hit movie “Purple Rain,” released in 1984. Prince passed away in 2016 due to an accidental overdose of prescription drugs.

On Prince’s birthday, we celebrate the life and legacy of this sovereign singer on June 7.

Famed American singer-songwriter Prince achieved global fame in the 1980s with his albums “Purple Rain” and “1999.” He was born Prince Rogers Nelson to jazz musician John Nelson and jazz singer Mattie Shaw in Minneapolis, Minnesota on June 7, 1958. From a very young age, Prince was intrigued by music and taught himself how to play the guitar, piano, and drums. Following his parents’ separation, Prince moved in with the Anderson family, his neighbors. He formed his band, named Grand Central, in high school with members Andre Anderson and Morris Day. Prince got his first deal with Warner Bros. Records in 1978.

The superhit album “Purple Rain” was released in 1984, which was also the soundtrack of the film of the same name. The movie was bestowed with an Academy Award for Best Original Song Score. “Around The World In A Day” was released in 1985, featuring the popular tracks ‘Pop Life,’ and ‘Raspberry Beret.’ Prince released his eighth studio album, “Parade” in 1986, featuring the sensational single ‘Kiss,’ which reigned as number one on the music charts.

Following his music group’s disbanding, Prince went solo with his albums “For You” in 1978, and “Prince” in 1979. The albums were remarkable due to the fact that Prince played practically all the instruments on all the songs himself. The sophomore release contained his first top 20 pop hit, the easygoing ‘I Wanna Be Your Lover.’

Due to growing tensions with his record label, Warner Bros., Prince’s career was mired in ups and downs. As a rebellious act against his label, Prince changed his name to the unpronounceable glyph O(+> in 1993, a fusion of female and male astrological symbols, which he used until 2000.

On April 21, 2016, Prince died at the age of 57 due to an accidental fentanyl overdose at his home and recording studio, Paisley Park, in Chanhassen, Minnesota.

The double album Sign o' the Times is released, to much critical acclaim. The Village Voice names it the top recording of the year.

Prince assembles a new band, the New Power Generation, and releases Diamonds and Pearls, which reaches number three on the Billboard charts.

Prince is inducted into the Rock and Roll Hall of Fame. Alicia Keys and the members of Outkast present the award.

Prince fans worldwide mourn the musician's death from an overdose of prescription drugs.

How old is Prince now?

Prince would have celebrated his 63rd birthday in 2021.

What nationality is Prince?

Prince’s nationality is American. He was born in Minnesota.

What is Prince's real name?

How to Celebrate Prince's Birthday

Why we love Prince 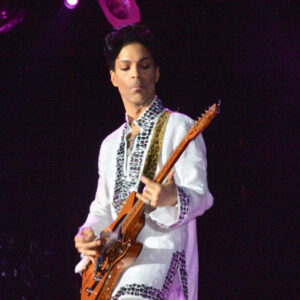