On the last Monday of August we have Summer Bank Holiday (England and Wales), taking place on August 29 this year. It gives everyone a chance to enjoy the last of summer holidays before a continuous grind until Christmas starts. Initially created as a way to allow bank workers to watch a key cricket match, the Summer Bank Holiday is now a public holiday in England and Wales. What is interesting is that any public holiday is now referred to as a bank holiday. With a few exceptions, most businesses and bank branches are closed on the designated day. Festivals and carnivals become a source of entertainment for many people. The Notting Hill Carnival and the Edinburgh Fringe Festival are just some of the most anticipated highlight events during the Summer Bank Holiday.

The Summer Bank Holiday (England and Wales) goes all the way back to the 19th century. In 1871, Sir John Lubbock, who was a Liberal politician, scientist, and banker, introduced the Bank Holidays Act. Previously, the bank workers got holidays according to the customary religious festivals that the country celebrated. Such holidays included Easter and Christmas. However, Lubbock, who worked as a banker himself in his family company, felt that more holidays needed to be given to bank workers during other important occasions, and in this case, this other important occasion included a cricket match. Once the Act was approved and implemented, it meant that no bank workers were compelled to go to their workplaces in order to provide service to incoming customers. Some people were so overjoyed with this new development that they initially referred to the first few years’ bank holidays as Sir John Lubbock’s Days.

The Summer Bank Holiday (England and Wales) takes place on the last Monday of August. Yet, this wasn’t always the case. Along with Scotland and Northern Ireland, England and Wales celebrated the Summer Bank Holiday on the first Monday of August. This was challenged by some politicians in court, and a trial started in 1965. More than half a decade later, the Summer Bank Holiday for England, Wales, and Northern Ireland was moved to the last Monday instead of the first. Scotland, to this day, continues to practice the Summer Bank Holiday on the first Monday of the month. During the three-day-long weekend, people spend the days out and about to enjoy the last of the summer festivities. One very renowned festival takes place in Notting Hill. It was first held in 1965 by immigrants from the Caribbean who were protesting against racism. The event is famous for its dances, music, and elaborate costumes. Being one of the popular festivals of all time, each year the event attracts at least two million audiences. Other festivals include the Manchester Pride Festival and the Creamfields Dance Music Festival of Cheshire.

Instead of 33, the Bank of England starts observing only four holidays, namely Christmas, May Day, Good Friday, and All Saints’ Day.

The Caribbean immigrants hold the first Notting Hill Festival as a way of protesting against poor living conditions and racism.

New Year’s Day is added to the list of Bank Holidays observed by England.

Is the second of August a holiday in England and Wales?

What are the 8 bank holidays in England?

Do we get an extra bank holiday in England in 2021?

How To Celebrate Summer Bank Holiday (England and Wales)

5 Facts About Public Holidays That Will Blow Your Mind

Why We Love Summer Bank Holiday (England and Wales) 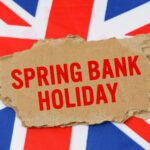