Spirit Day is an annual observance that takes place on the third Thursday in October on October 20 this year. This day aims to create awareness for the bullying and harassment that the L.G.B.T.Q community faces. Millions of people worldwide identify as queer, and many more are yet to publicly declare their status. Such a large community of people shouldn’t be alienated or marginalized because of their sexual orientation. But the reality, sadly, is that they are. All over the world, L.G.B.T.Q youths suffer harassment because of their identity. There is a need for transgender individuals to have more protected rights.

One day in September 2010, Canadian teenager Brittany McMillan was browsing through Tumblr. What she came across was unfortunate and devastating. She stumbled upon a rash of widely publicized bully-related suicides of gay teenagers. Overwhelmed by the news, she felt persuaded to do something to spread awareness about the loss of these school students. She also wanted to support people going through similar problems.

After learning about Canada’s anti-bullying Pink Shirt Day, she took inspiration from that and decided to make a Tumblr asking students to wear purple in support of L.G.B.T.Q youths. She chose purple because the color represents spirit on the Pride Flag.

Her hard work and determination resulted in the very first Spirit Day celebration on October 20, 2010. Her post broke the internet and drew the attention of GLAAD, an American non-governmental media monitoring organization founded as a protest against defamatory coverage of L.G.B.T.Q people. Now the day is organized and promoted by GLAAD, which also provides Spirit Day resource kits for ally-youths to stand up against bullying in their own schools.

Over the years it has grown in popularity and visibility. It now sees millions of participants, including schools, businesses, sports teams, celebrities, and media outlets. Spirit Day observers also wear the color purple to show their support for the L.G.B.T.Q youth and honor the community’s suicide victims. Supporters also celebrate by changing their profile pictures and extensively using the hashtags #SpiritDay and #ChooseKindness in their social media posts.

Congress passes the Employment Non-Discrimination Act that prohibits discrimination by sexual orientation in the workplace.

The U.S. military abolishes the 'Don’t Ask, Don’t Tell' policy, which restricted gay, lesbian, and bisexual people from openly serving in the army.

Influential personalities and organizations, such as the White House, Oprah Winfrey, Ashton Kutcher, MTV, and Facebook show their support for Spirit Day.

Laverne Cox, a transgender actress and activist, hosts an event in NYC, in which she turns on the lights strung on the Empire State Building in support of Spirit Day.

What is a nonbinary person?

A non-binary person falls under the umbrella term for gender identities that are neither male nor female‍.

The ‘Q’ in L.G.B.T.Q stands for ‘Queer.’ It is used by some people as a specific identity and is even used as an umbrella term for a non-cisgender or heterosexual.

What does gender fluidity mean?

Gender fluidity means that a person’s gender expression or identity or both can change over time.

Why We Love Spirit Day 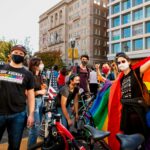 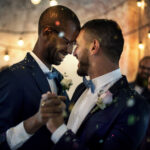 National Get Smart About Credit Day