The second Saturday of October is celebrated as National Motorcycle Ride Day and aren’t we all grateful for this blessing of a day. The first motorcycle was built in 1885 in Germany and has been dominating the roads ever since. Their popularity has brought about various motorcycle types, the major ones being street, off-road, and dual purpose. These are further divided into many subtypes; these subtypes often have a racing counterpart.

For many, the motorcycle is more than a means of transportation, it is an experience, a feeling, an adventure like no other. It is often associated with emancipation, the desire to break free from all the chains. It comes as no surprise the motorcycle has managed to secure its place in everyone’s heart. It is one adrenaline-filled ticket to your freedom.

The first motorcycle came into existence in 1885, when Gottlieb Daimler and Wilhelm Maybach, two German inventors, built an internal combustion gasoline-fueled motorcycle. It was named “Daimler Reitwagen” (riding wagon), the first of the modern motorcycles that we all know today. This invention inspired many others, who began making their versions of the self-propelled bicycle.

Motorcycle production escalated during the First World War, to improve communication systems with front-line troops. Motorcycles replaced messengers on horses with dispatch riders who carried messages, conducted reconnaissance activities, and acted as military police. After the Second World War, the motorcycle industry experienced widespread popularity brought about by lower costs, engineering advancements, and better road networks.
Today, motorcycles represent one of the most affordable forms of transport all across the planet, with Asia-Pacific and Southern and Eastern Asia regions dominating the market. The evolution of the motorcycle from being an instrument of transportation to a thrill-packed adventure machine is why it deserves a special day of appreciation. And the month of October gives us the perfect opportunity to celebrate the wonders of this great invention.

The Velocipede is a two-cylinder, steam-powered motorcycle.

German company Hildebrand & Wolfmüller are the first to call it the “motorcycle.”

William Harley and his friends Arthur and Walter Davidson launch the Motor Company.

The holiday is founded for celebrating riding motorcycles in the fall weather.

Is it difficult to ride a motorcycle?

Riding a motorcycle isn’t at all difficult. Although it may take some time to adapt to the motorcycle’s weight, controls, and maneuverability. For a beginner, it can take between two to eight weeks of daily practice to learn how to ride a motorcycle safely.

How much does it cost to maintain a motorcycle?

Costs come around $1,000 a year which includes regular maintenance (oil changes, chain maintenance, etc.). This needs to be done every 5,000 to 20,000 miles depending on the motorcycle.

Is it safe to ride a motorcycle in the rain?

One must steer clear of riding at the beginning of a storm, as the roads are full of brake fluid, oil, dirt, and other grime before it rains. Drive extra slow just after the storm begins when it’s still raining. 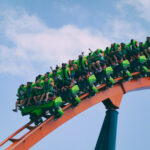