National Eat Beans Day (or National Eat Your Beans Day) occurs on July 3 each year, and we guarantee it will be a holiday that will give you a whole new appreciation for legumes as a food group. And if not, perhaps our fun facts and riddles will have you full of beans.  Try this one on for size — ‘I am a bean, very lean. I am not fat, I’m sure of that. Like all beans, I’m small and round — but unlike others, I don’t grow in the ground’. Giving away the answer would be too easy, but we’ll give you a hint — this may be a kid’s favorite kind of bean. It may also surprise you to know that beans are not strictly classified as ‘veggies’ either since legumes by definition are any seeds or fruits that grow within pods or the edible pods themselves, which grow on leguminous plants (i.e. those belonging to the pea family). This opens up a whole world of beans to us, which should be exciting, especially for those who grew up being forced to eat beans as a vegetable.

Though the exact date and reason for National Eat Beans Day being made a holiday are not known, we do know that the history of the bean itself predates even the invention of the pots used to cook beans.  Bean cultivation dates back as early as 7,000 years ago, making it a staple that has stood the test of time, and we’re not surprised. With amazing health benefits, legumes are plant-based, protein-packed powerhouses of nutrition. So this also means that they’re for everyone, no matter the diet or lifestyle choice. It’s very rare to find a person allergic to beans too, though some legumes can trigger allergic reactions, such as peanuts.

Beans are originally from wild vines which grow in Central and South America. This is known as the common bean, and since then, thousands of bean varieties exist today and are cultivated all over the world. They are one of the most versatile crops and can be grown almost anywhere. 5,000 years ago the lima bean and other varieties were a popular favorite among the Incas and Aztecs, and the popularity of beans is so much so that they are worth a mention in Homer’s “Iliad,” where he uses beans as a metaphor. Ancient Egyptians seem to have also been partial to beans and lentils, as paintings and physical evidence shows that bodies were buried with beans, to nourish them on their journey to the afterlife. By the 1500s, with the advent of trade via ships, beans began to reach all the corners of the globe and more varieties began to be cultivated. Though often viewed as a poor man’s food, beans have been an important source of nourishment for people in dire circumstances; such as the soldiers who fought in the First and Second World Wars, or the Europeans who were dying out due to the spread of the plague in Europe, during the Middle Ages. Who would have thought beans could be such lifesavers.

The French begin to add chickpeas to their vegetable soup, making it a heartier meal in every way.

Emperor Charlemagne orders the cultivation of chickpeas to save people from the ravage of war, and it works.

Beans Spread Across the World

With the increase in trade, beans begin to be traded all over the world.

Beans become the poor man’s meat during the Great Depression in America, enabling many families to survive.

What are the healthiest beans to eat?

Is it bad to eat beans at night?

Yes, eating beans at night is not recommended. This is because beans can cause indigestion or gas problems, so it’s better to stick to eating that bowl of chili during the daytime.

Is it okay to eat beans every day?

Yes! Not only are beans low in fat, but they are also great sources of protein and fiber, and they come packed with nutrients like iron, folate, calcium, and potassium. This can help protect against high cholesterol which may lead to heart disease. The recommended portion size of beans/lentils is 25-38 grams a day. 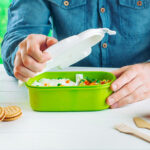