International Chefs Day is observed all over the world on October 20 of every year. The day celebrates chefs and spreads awareness about eating healthy. Every year, a theme is decided for International Chefs Day — in 2020, it was ‘Healthy Food for the Future,’ and the same theme was repeated in 2021, although with a deeper focus on sustainability and ensuring a healthy environment for future generations. Dr. Bill Gallagher, a renowned master chef and former president of the World Association of Chefs Societies (Worldchefs), established International Chefs Day in 2004.

Unlike most other modern professions, the chef has played a significant role in our society since the beginning of time. Food is a basic need, and experiments with food have been going on for thousands of years. In the first century A.D., a Roman gourmet called Marcus Apicius wrote the world’s first cookbook. His book was named after him: “Apicius,” also known as “The Art of Cooking.” The book contains more than 400 recipes, and Marcus traveled great distances to secure the ingredients.

In 1765, A. Boulanger opened the first business in Paris that was called a restaurant. The sign above his door said ‘restoratives,’ or ‘restaurants,’ which referred to the soups and broths that were being offered on the menu. The word ‘restaurant’ then took on the meaning, ‘a public eating place.’

In 1809, the French chef Alexis Soyer became one of the most distinguished cooks in England because he developed cheap and nutritious meals for the poor and the working class, especially during the potato famine of 1845–1849 in Ireland. He also invented a field stove called the ‘Soyer stove’ for the British soldiers serving in the Crimean War.

Auguste Escoffier, an eminent chef from France, created the brigade system and simplified kitchen dynamics in the 1870s. According to his system, each person in the kitchen had a particular task. The system worked like a military hierarchy — first, there was the head chef in charge of the whole kitchen, then the sous chef, and so on. His book “Le Guide Culinaire” is still in print and is included in the curriculum of modern culinary students due to its relevance.

The First Cookbook is Written

A. Boulanger Opens the First Restaurant

He names his shop 'restoratives' or 'restaurant' because, according to him, his soups and broths "restore life."

What day is National Chef Day?

Who is the most notable celebrity chef?

Gordon Ramsay is the most famous chef, currently. He has been awarded a total of 16 Michelin stars and has appeared on several TV programs, including “MasterChef U.S.,” “Hell’s Kitchen,” and “Kitchen Nightmares.”

Are Michelin stars awarded to the restaurant or a chef?

How To Celebrate International Chefs Day

5 Important Facts About Chefs And The Culinary Arts

Why We Love International Chefs Day 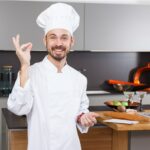 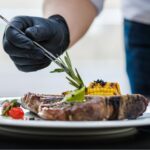