Make no bones about it, World Osteoporosis Day on October 20, is the time to learn about osteoporosis. Celebrate good health and educate yourself and others about the value of taking care of your body and protecting your bones and muscles from disabling and life-threatening fractures.

World Osteoporosis Day (WOD) is the annual highpoint of activities sponsored by the International Osteoporosis Foundation (IOF), which is deeply involved in educating the public about this devastating bone disease. Osteoporosis renders bones so frail and brittle that any slight action including even a sneeze or a fall can be life-threatening, causing never-ending pain and discomfort from entire bone breaks and fractures.

It’s interesting to note that prior to 1994, osteoporosis wasn’t even considered a major disease. But in 1998, two prominent organizations committed to educating the public about osteoporosis, combined to create the International Osteoporosis Foundation.

The founding of the IOF was a combination of the joint efforts of the European Foundation for Osteoporosis (EFFO) created in 1987 and the International Federation of Societies on Skeletal Diseases (IFSSD), which was initiated  in 1995. By bringing both organizations together under a single umbrella, there was a better focus and a co-mingling of resources for the world’s scientists, doctors and other health advocacy organizations who were fighting osteoporosis.

By the late 90s, the UN’s World Health Organization (WHO) co-sponsored World Osteoporosis Day events with the IOF. Since that time, the IOF has taken over much of the leadership in sponsoring awareness-raising events all over the world.

One of the most important events for WOD is checking bone density. Bones that are less dense are more liable to easily break or fracture at sudden movement or during minor falls. These bone density tests are available on WOD all over the world. But there are events taking place globally that not only raise awareness but are all just plain fun! To find out more, log onto the IOF website.

The National Osteoporosis Society celebrates raising awareness about osteoporosis in the UK on October 20.

The IOF initiates another global campaign that focuses on avoiding secondary bone fractures.

The International Osteoporosis Foundation goes digital with an e-newsletter

The IOF launches an osteoporosis awareness campaign to over a million of its members with a “Love Your Bones e-newsletter.”

Does osteoporosis get worse with time?

The primary culprit for osteoporosis is the spinal compression fracture. It can get worse if you are in motion, like walking, running or standing.

You can’t reverse osteoporosis but with the right treatments, you can slow down its effects.

Can osteoporosis shorten your life expectancy?

With better treatments for newly-diagnosed patients suffering from osteoporosis, women under age 75 and men under age 60 can expect to live an extra 15 years.

How to Observe World Osteoporosis Day

Why World Osteoporosis Day is Important 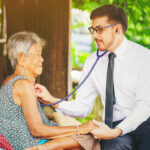