Josh Allen, born on May 21, 1996, is a celebrated football quarterback for the Buffalo Bills in the National Football League. The Bills selected him with the seventh overall pick in the 2018 N.F.L. Draft because of his professional football experience, which he began while still in college and played as a bowl game M.V.P. He had a breakthrough season in 2020, leading the Buffalo Bills to their first division title since 1995 and a playoff victory. It was the franchise’s first division championship since 1991 because of the leadership of his club in 2021. He made history by being the first quarterback in the National Football League to score a touchdown on each of the game’s offensive possessions. We can’t wait to share this sports superstar’s accomplishments with you.

Joshua Patrick Allen is a celebrated football quarterback who plays for the Buffalo Bills in the National Football League. He was born in Firebaugh, California, on May 21, 1996. This Californian little village is located about 40 miles to the west of Fresno. When his great-grandfather immigrated from Sweden and lived there while the Great Depression continued in 1907, he was raised on a cotton plantation that his family owned. He attended Firebaugh High School and received his diploma in 2014. Allen, a Fresno State supporter since he was a young child, made several unsuccessful attempts to get the coaching staff’s attention. Tim DeRuyter, the bulldog’s head coach, was also approached by his father to discuss Allen, but he resisted. Allen never received a scholarship offer.

Allen once had a “walk-on” offer from the San Diego State coach, but he declined it because there was no assurance of playing time. Nevertheless, due to his participation in numerous activities at school, his athletic personality continued to grow. He volunteered at the family farm and his mother’s restaurant when he wasn’t in school. He attended Reedley College, where he directed an offense that averaged 452.2 yards per game in his lone season. In total offense, they were ranked ninth among all California junior college teams. Individually, Allen recorded 26 touchdown passes in 2014, ranking him seventh among all California junior college quarterbacks. He expected to receive multiple scholarships after high school, but he only received two, Eastern Michigan and Wyoming, after impressing Craig Bohl, the head coach. Brent Vigen, the offensive coordinator, recruited him. He enrolled in Wyoming shortly before the 2015 season began. He was a bowl game MVP while playing professionally, and the Bills selected him with the seventh overall pick in the 2018 N.F.L Draft because of this.

He had a breakthrough season in 2020, leading the Buffalo Bills to their first playoff appearance since 1995 and the A.F.C. Championship Game. During the regular season, Allen also set Bill’s franchise records for passing yards and touchdowns. All this while earning second-team All-Pro and Pro Bowl recognition. In 2021, he guided his squad to its second consecutive division triumph and its first playoff victory since 1991. He made history by being the first quarterback in the National Football League to score a touchdown on each of the game’s offensive possessions.

Outside of criticism for his accuracy and consistency coming out of college, he was much sought after in the National Football League draft because of his raw potential. One of his strengths has been described as being his quickness and scrambling. Additionally, he has demonstrated the capacity to leap substantially above defenders to sustain offensive drives.

He Receives an Agricultural Award

Allen is recognized and placed fourth in the nation for the diversified crop production of cantaloupe, cotton, and wheat.

He is Selected by the Buffalo Bills

The Buffalo Bills select Allen as the overall selection in the National Football League Draft.

He Has a Breakout Season

Allen gets a breakout season when he leads his team to their first division title and a playoff victory.

Allen leads his team to a consecutive division title.

Why We Love Josh Allen

Does Josh Allen have kids?

Yes, he is the father of two boys.

What was Josh Allen's passer rating?

Allen has his best passer rating in a game this season versus the Titans last Monday, with a 128.9 rating.

How long is Josh Allen been in the N.F.L.?

Allen has played five seasons in his career. 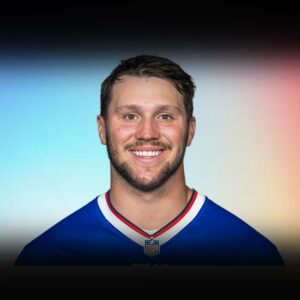