Zachary Kapono Wilson, widely known as Zach Wilson, was born in Draper, Utah, on August 3, 1999. Wilson is an American football player in the National Football League (N.F.L.) as the New York Jets quarterback. He has shown great talents since playing for his high school team and further made a name for himself in university as part of the B.Y.U. Cougars football team. Wilson signed a four-year contract with the New York Jets in 2021, officially bringing him into the N.F.L. We’ll help you celebrate his special day right here with all the details of his amazing achievements.

Zachary Kapono Wilson, widely known as Zach Wilson, was born in Draper, Utah, on August 3, 1999. Having three brothers and two sisters, he was one of six children born to Michael Wilson and Lisa Neeleman. When Wilson was a teenager and a student at Draper’s Corner Canyon High School, his football prowess was already evident. In his senior year, he passed for 2,986 yards and 24 touchdowns, scored eight times, and ran for 752 yards. Wilson had intended to attend Boise State University and become their quarterback, but he ultimately chose to enroll at Brigham Young University (B.Y.U.) From 2018 to 2020, he was a member of the B.Y.U Cougars football team.

Wilson started seven of the nine games he played in during his first season at B.Y.U. In his first game for B.Y.U. versus Hawaii, he made history as the program’s youngest quarterback to ever start a game. Wilson earned the title of M.V.P. of the 2018 Famous Idaho Potato Bowl after beating Western Michigan 49–18 and completing all 18 of his throws for 317 yards and four touchdowns. Wilson also won the title of B.Y.U’s M.V.P. in 2019 while still a sophomore. He started nine games and completed 199 of his 319 passes for 2,382 yards, including nine interceptions and 11 touchdowns. He carved two other achievements a year later as the offensive M.V.P. of the 2020 Boca Raton Bowl and the receiver of the 2020 Polynesian College Football ‘Player of the Year Award;’ the latter he shared with Talanoa Hufanga, a safety of U.S.C. During this year, he started 12 games, completed 247 out of 336 passes for 3,692 yards, and made 33 touchdowns. He also made three interceptions while rushing for 255 yards and 10 touchdowns.

After agreeing to a four-year deal with the New York Jets on July 29, 2021, Wilson made his professional debut. In the first round of the 2021 N.F.L. Draft, he was chosen second out of a group of five quarterbacks. A fifth-year option, a bonus of $22.9 million, and a fully guaranteed $35.15 million were included in the agreement. The Jets’ victory over the Tennessee Titans in week four was his first N.F.L victory. Following a hit from Matthew Judon of the New England Patriots in week seven, Wilson sustained a knee injury and was forced to miss the following four games. He returned in week 12, defeating Houston, Texas, and won his first away game.

Wilson plays for the B.Y.U. Cougars, where he becomes the M.V.P. of the 2018 Famous Idaho Potato Bowl.

The Career Climbs Up

Wilson becomes the B.Y.U’s M.V.P. after starting nine games, completing 199 of his 319 passes for 2,382 yards, including nine interceptions and 11 touchdowns.

Wilson is named the offensive M.V.P. of the Boca Raton Bowl and receives the Polynesian College Football Player of the Year Award.’

Wilson signs a four-year deal with the New York Jets, becoming the second quarterback to be chosen in the first round of the 2021 N.F.L. Draft.

Why We Love Zach Wilson

Who is Zach Wilson’s girlfriend?

It was thought to be 19-year-old professional dancer Abbey Gile. However, in early 2022, the two seemed to have erased each other from their Instagram.

What is Zach Wilson’s jersey number?

How many games has Zach Wilson played? 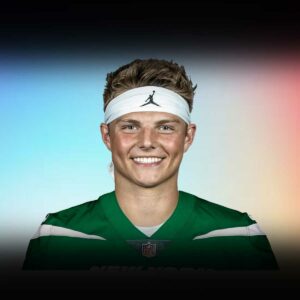