Apple Cider Day is celebrated on November 18 every year. The day celebrates the rich and fruity beverage that fills our hearts and bodies with warmth. They say an apple a day keeps the doctor away, but a glass of apple cider at the end of a long day can rejuvenate the soul. Apple cider is made from freshly harvested apples that are mashed and made to resemble applesauce. This is then pressed to extract fresh juice and fermented. After the fermentation process is done, we get the sweet and spicy apple cider — the seasonal Autumn drink.

The origin of apple cider dates back to 3,000 B.C. when the Celts in Britain made the beverage using crabapples. Unlike the cider we know today, this beverage was bitter because it used the local crabapples that grew in small shrubs. The Roman invasion of England in 55 B.C. brought with it apple cultivators and orcharding techniques. The harvests from these orchards were then used to make cider.

The Norman invasion of England in 1066 introduced acidic cider apples and advanced apple-pressing technology to make the juice-extraction process easier. This made cider a popular drink in England and around the world. Western Europe went through a climate shift between the 14th and 19th centuries called The Little Ice Age, where the overall temperature dropped, causing grape vineyards to suffer as they needed a warmer climate. Since apples could survive cooler temperatures, cider became the predominant alcoholic beverage over wine.

Due to an increasing market and demand, small farmers started selling their orchards to commercial cider producers in the 19th century. These producers then expanded their businesses and revamped old methods of cultivation to meet the growing demands. By the 1980s, the image of apple cider had become that of a cheap drink which country people drank. However, the Irish company Magners revived its status in the 21st century through its sleek and professional advertising campaigns showing cider as a drink of the modern era for a younger crowd who enjoyed cider.

The Celts in Britain discover cider using nearby crabapple shrubs to make a bitter beverage.

The Romans bring apple cultivators and orcharding techniques with them leading to the production of apple cider.

The Commercialization of Cider

Cider is produced in large quantities by big businesses, but its reputation slowly degrades and is seen as a cheap drink.

Is there a World Cider Day?

Is cider an alcoholic drink?

Cider is an alcoholic beverage made by fermenting apple extract. Its alcohol content ranges between 3% to 8.5%.


Is apple cider really bad for you?

Apple cider (not hard cider) contains protein, fiber, potassium, calcium, iron, vitamin A, and vitamin C! So, you can drink it to your heart’s content!

How To Celebrate Apple Cider Day

Why We Celebrate Apple Cider Day 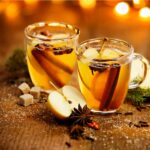