Adult Autism Awareness Day is observed by autistic adults and their loved ones each year on April 18. Autism, also known as Autism Spectrum Disorder (A.S.D.), can be identified as a broad range of conditions that are characterized by challenges pertaining to social skills, repetitive behaviors, speech, and nonverbal communication. Statistics show that in the United States, autism affects an estimated one in 54 children today. It is important to realize that there’s no one type of autism — these conditions are often individualistic. Adults with autism are also significant contributors to fields of arts, commerce, science, and more. The day hopes to make life more convenient for autistic adults. Show your support to those who are close to you and guide them towards resources that are available for them, Scholaroo has scholarships resources that can help those in need to expand their horizon.

A person may show the signs of autism as early as the age of two or three years old. However, some may show associated development challenges at an even earlier age. Research shows that early medical intervention in such cases leads to positive outcomes later in life for people with autism. Caretakers must remember that several factors influence the development of autism. Along with autism, the person may also suffer from sensory sensitivities and medical issues such as gastrointestinal disorders, seizures or sleep disorders, and mental health issues such as anxiety, depression, and attention disorders.

Despite what many think, there is no one cause of autism. Research suggests that autism may develop from both genetic and environmental influences. The symptoms of autism in adults can display differently from those in children. Many adults have learned to cope with their symptoms over time. A.S.D. is one of the most common neurological development disorders. In most cases, autistic people get a diagnosis as children, after they turn four. Some autistic adults are not diagnosed in childhood, even if their symptoms are acute.

Signs and symptoms of A.S.D. in adults are many and can include the following: difficulty with speaking to others and sustaining friendships. There could be battles with controlling their emotions, focusing interest on one specific topic, and repeatedly talking about it. The symptoms of autism deviate from one person to another. Adult Autism Awareness Day was created to make life easier for such adults and to create awareness all around.

The term is developed by psychiatrist Eugen Bleuler from Switzerland.

He is the first to define autism.

When is World Autism Awareness Day?

April 2 is a U.N. Awareness Day, called World Autism Awareness Day. It was instituted in 2007 to create awareness of the millions of autistic children in our world.

What is an Autism Spectrum Disorder (ASD)?

Autism Spectrum Disorder is a developmental disorder. It typically is portrayed by behavior and communication issues that affect a person’s ability to understand social interactions. It also causes repetitive and restricted behavior.

What does the Autism Society do to promote inclusion?

The Autism Society reminds us of its “nationwide effort to promote autism awareness, inclusion, and self-determination for all. It strives to make sure everyone with autism is given the opportunity to achieve the best quality of life possible.”

5 Facts About Autism That Will Blow Your Mind 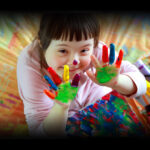