National West Virginia Day is on June 20 every year. This day celebrates West Virginia as the last state created from one of the thirteen original colonies under the British Empire. West Virginia has vast beautiful landscapes with three popular mountain ridges namely, Allegheny, Appalachian, and the Blue Ridge Mountains. West Virginia is the largest producer of coal east of the Mississippi River. The state has deep cultural roots and heritage from its native ancestors.

Before the arrival of European settlers, West Virginia used to be a favorite hunting ground for numerous Native Americans. It has old earthen mounds constructed by different mound builder cultures. Once the Europeans arrived and settled here, the locals were pushed to the outskirts.

The earliest civilization in the region was in 10,500 B.C. when the Paleo-Indian culture appeared along the major river valleys and water sources. Subsequently, the Adena culture was the dominant influence in West Virginia in the year 500 B.C. The Adena Indians would use ceremonial pipes almost like works of art. They were also called the Woodland Indians. They lived in round wicker-sided and bark sheet roofed houses — wigwams and grew sunflowers, gourds, and squash. Their community had farmers and cultivators. They also reared dogs as pets.

In 1829, the Virginia Constitutional Convention met in Richmond to discuss reforms to Virginia’s outdated constitution. Philip Doddridge wanted western Virginians to get a more democratic system of government but these desires were rejected by leaders from east of the Alleghenies.

The state of Virginia voted to break away from the United States during the time of the Civil War in 1861. This was unsuccessful, leading to the formation of the state called West Virginia which would be in support of the Union. It was granted statehood by Congress on June 20, 1863.

The Earliest Civilization in West Virginia

The Paleo-Indian tribe appears along the major river valleys and water sources in the region.

Influence of the Adena Indians

Also called the Woodland Indians, they make contributions to arts and culture in West Virginia.

The First Constitutional Convention is Organized

The Virginia Constitutional Convention meets in Richmond to discuss its outdated constitution.

What is closed on National West Virginia Day?

It’s a state holiday in West Virginia. For this reason, many government offices, libraries, and schools remain closed on this day.

Is West Virginia a Red State?

West Virginia is a Republican state currently. Republicans John McCain won the state in 2008, followed by Mitt Romney in 2012, and Donald Trump in 2016 and 2020.

What is the most common job in West Virginia?

The most common jobs held by residents of West Virginia are cashiers and sales workers. Truck drivers and registered nurses are also some of the common professions. 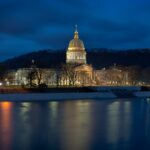 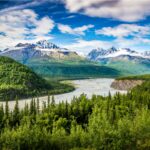