National Ice Cream Soda Day is celebrated every year on June 20. Americans all over the country enjoy their favorite dessert by trying out various flavors and making it in different styles. With more than a century of history, there is so much to learn about ice cream sodas, right from how they were invented to the different methods of preparing and consuming them in different states and cities of the U.S.

As with most inventions, ice cream soda was created unintentionally by the coming together of ice cream and soda. It is believed that Robert Green was trying to prepare chilled soda at a Philadelphia fair but had run out of ice shavings. He came up with the idea of adding ice cream to the soda to cool it. Thus, the ice cream soda was born.

Now, there are many different stories about the invention of ice cream soda. Even though Robert Green loudly claimed to be the inventor of the ice cream soda — and even had it inscribed on his tombstone — another legend goes that it was Fred Sanders who invented the delicious summer drink. Sanders ran a confection shop and added ice cream to soda when he could not find sweet cream.

More people continued to claim credit for the invention of the ice cream soda, especially because it was marketed so well and hugely popular. George Guy and Philip Mohr are two well-known claimants to the title of inventor of ice cream soda.

Robert Green mentions in his will to be recognized as the ‘Originator of the Ice Cream Soda’ on his tombstone.

Can I have ice cream sodas in winter?

Why not? There are many fantastic winter ice cream soda recipes that you can try like adding ginger beer to the ice cream, which adds a touch of spiciness to the drink.

Can I add fresh fruit to ice cream soda?

Yes, you can add any variety of seasonal fresh fruit to your ice cream soda and make it a super healthy drink. Peaches and berries are quite popular additions.

What if I run out of soda water?

There are many affordable soda water machines that you can buy online to make soda water in the comfort of your home.

5 Facts About Frozen Desserts That Will Blow Your Mind 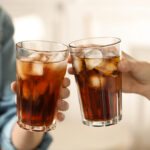 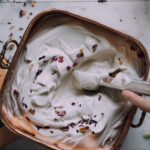