October is a treasure trove of a month for celebrating seafood, and what better way to start the feast than by celebrating National Fried Scallops Day on October 2? When cooked the right way, scallops become the perfect melt-in-your-mouth delicacy, taking you on a food ride of oceanic excellence. Scallops belong to the Pectinidae family of mollusks. They can swim in the water by rapidly closing and opening their shells using a muscle, which is usually the most consumed part by humans. Scallops are enjoyed in a variety of ways (i.e. in soups, pasta, or sushi), but one of the most popular and loved scallops are the ones fried in butter and a mixture of herbs and other flavors.

While all our attention will be on some delicious fried scallops this National Fried Scallops Day, did you know that it is usually oysters that tend to get all the love whenever shellfish is being talked about? Yes, oysters are great, but scallops are pretty on par with them. Scallops have been around for a long time now. They have been found in fossil forms that are as old as 300 million years. The marine bivalve mollusks come from the general family of Pectinidae. Their cosmopolitanism means that they can be found in every ocean in the world, making them a good source for studying the science of oceans. Scallops are known to travel short distances, but they are also capable of traveling great distances by simply moving their shells rapidly on the ocean floor. Apart from their delicious meat, scallops are also appreciated and prized for their aesthetically colorful shells. Many vacationers and beach enthusiasts collect the shells to keep as prized possessions in their collections.

Scallops started gaining popularity in the U.S. in the 19th century only, as before that the food item wasn’t considered to be the choice food for many. When people started immigrating to America in the 1600s, they found the shores to be rich with food, ranging from shellfish to cod, and it was the latter that was harvested more. Clams, lobsters, shrimps, and oysters were the most popular of the shellfish, while mussels and scallops were not a favorite due to their unconventional sweet flavors. However, as more and more people came to America, scallops recipes started evolving, and by the 1920s, the food item had become a staple in American households and on restaurant menus. People enjoyed it by sauteing it and frying it in butter. Many also liked it baked, stuffed, and pickled.

A recipe of sauteing and stewing scallops appears in “Miss Beecher’s Domestic Receipt Book,” which is recorded as one of the earliest books to have a recipe for scallops in it.

The evolution of new scallops recipes takes the food item to levels of fame it never experienced before.

Is a scallop a mollusk?

Yes, a scallop is a mollusk. To be more precise, it is a bivalve mollusk (like oysters and clams), which is a shellfish that has a two-part hinged shell containing soft invertebrates.

Where are scallops found?

Scallops are found in all oceans of the world, especially in the Indo-Pacific region. Specific species of scallops will be found in specific areas. For instance, bay scallops are only found in bays and shallow waters.

How can you tell a real scallop from a fake scallop?

Real scallops will have distinct fibers running lengthwise, having the same thickness all around their edges. On the other hand, a fake scallop will most likely have fewer fibers and will be uneven.

5 Facts About Scallops That Will Blow Your Mind 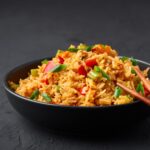