National EMS week honors the contributions of those who work on the medical front line. This year, it’s celebrated from May 21 to May 23. The week gives Emergency Medical Services (EMS), and those who would like to credit them, a chance to recognize their hard work in potentially fatal situations daily. Whether an accident, a national emergency, or a terrorist act, the EMS work quickly and efficiently to save lives. This week is the perfect time to create daily themes, teach and learn something, team build and most importantly understand the magnitude of how much the EMS do. EMS this week will more than likely do special trainings to ensure up to date effective life saving treatments. Whether celebrated together or alone, across the nation a lot is going on during this week.

In November 1974, President Gerald Ford announced and authorized the first National Emergency Medical Services Week from November 3 to November 10. This was to celebrate the emergency medical services and the amazing and important work they do. Not long before in 1973, an act was introduced called the EMS Systems Act which provided money for the creation of 300+ EMS systems throughout the country with the intent of future growth. By 1975, 32 residencies were offered to physicians across the nation which were preparing them for further emergencies at all levels.

The American College of Physicians were influential in establishing EMS week when President Ford declared it in 1974. The national week was reinstituted by ACEP in 1982 and this was around the time that EMS week was moved to September yearly.

In the 1980’s, ACEP started collecting ideas and distributing information about and for EMS Week. They developed things like professional marketing materials and EMS Week Planning Kits. In 1992, it was again moved to the week beginning May 3. This was because there needed to be a clear separation between EMS week and Fire Prevention Week. There was an obvious issue amongst fire and EMS services staff who felt that having the two events too close to each other was affecting the aim of each program.

In the last 10 years, EMS has been vital to emergency medicine and to saving lives. Medical emergencies and situations faced by all medical practitioners require quick problem solving and years of training. As the field expands, EMS will always be front line when it comes to emergencies and emergency medicines. At present, 25,000 EMS Week planning guides are given out free of charge to fire departments, EMS services, rescue squads, volunteers and emergency departments all over the US.

In South Africa, the week was used to address challenges paramedics face.

Columbine High School had a student attack, and the American Red Cross incorporated defibrillator training into its CPR course.

A pair of medics

The American Ambulance association was formed.

AT&T designated the number 911 for emergency use.

How do you celebrate EMS Week?

Celebrate EMS week by educating yourself and loved ones about safety, actively thanking someone who works in EMS and even sharing stories about how EMS workers made an impact in your personal life.

When is EMS Week?

This year, EMS week starts on the third Sunday of May, therefore it begins of May 17 and ends May 23.

When did EMS start?

Modern EMS practices initially began years ago, during the time of Napoleon in order to aid injured soldiers in battle.

Why We Love National EMS Week 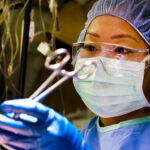