Liza Minnelli, born on March 12, 1946, is an iconic actress, dancer, singer, and choreographer in America. She is famous for her acting chops, powerful singing, and commanding presence on the stage. She is one of the few stars to have won the Grammy ‘Legend Award,’ an Emmy Award, a Tony Award, and an Oscar. She was also awarded the ‘Knight of the French Legion of Honour.’ She is the daughter of the iconic singer and actress Judy Garland and director Vicente Minnelli. We will help you celebrate her birthday right here.

Liza May Minnelli was born on March 12, 1946, in Los Angeles, California. She was born to actress-singer Judy Garland and director Vincente Minnelli. She was named after Ira Gershwin’s song ‘Liza (All the Clouds Rolls Away).’ She has a half-sister, Lorna, and a half-brother, Joey, from her mother’s marriage to Sid Luft. She also has another half-sister, Christiane Nina Minnelli, from her father’s second marriage. Her godparents are William Spier and Kay Thompson. In 1949, she had her first performance at three years old in the musical, “In the Good Old Summertime,” which starred her mother. She moved to New York in 1961 and attended the High School of Performing Arts and the Chadwick School thereafter.

Minnelli appeared on a television show as a child in the 1950s by Art Linkletter. She also appeared in several shows throughout the 1960s. In 1963, her professional career began when she performed in the musical “Best Foot Forward” at 17. In 1964, she played a role in “Nightingale for Sale,” which was followed by “Charlie Bubbles” in 1968. Her most famous role was in 1972 in “Cabaret,” for which she won the Academy Award for ‘Best Actress in a Leading Role’ along with a BAFTA, Golden Globe Award, and more. She also performed in a concert with her mother at the London Palladium in 1964. Minnelli also starred in “The Diary of Anne Frank” (1959), toured Israel, debuted on Broadway at 19 years old, and won her Tony Award for a lead role in “Flora the Red Menace” (1965). She debuted as a nightclub singer at 19 in Washington, D.C. She recorded many albums for Capitol Records later on, including “There Is a Time” in 1966 and her first album track, “Liza! Liza!” in 1964. She recorded several albums throughout her career, including her last, “Confessions,” which she released in 2010. After a successful movie career, she also appeared in the 2006 comedy “The Oh in Ohio.” She also had a solo tour in 1992, “Liza Minnelli Live from Radio City Music Hall.” Her television movie, “Liza’s at The Palace,” aired in 2009.

Minnelli suffered from alcoholism and was a recreational drug user in the 1970s. She is an Episcopalian. She has been married four times. However, it all ended in divorce. She did not have any children. She has served on the boards of several charities throughout her life, including the I.A.H.P. for 20 years and amfAR.

She features in “Ford Star Jubilee” and it’s her first appearance.

She plays the lead actress in “Flora the Red Menace.”

She Releases Her First Studio Album

She signs on Capitol Records and drops “Liza! Liza!” as her first studio album.

She Goes on Tour

Why We Love Liza Minnelli

Why is Liza Minnelli in a wheelchair?

She was diagnosed with encephalitis disease in 2000.

Does Liza Minnelli have a child?

She has no children.

How old is Liza Minnelli today? 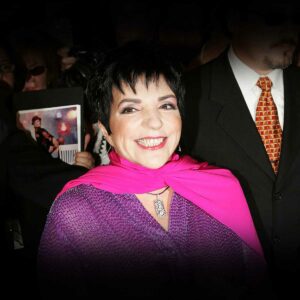