Adam Noah Levine came into the world on March 18, 1979. He began his musical career in 1994 with Kara’s Flowers, a rock band that got disbanded after the commercial failure of their first album “The Fourth World.” Levine has since transcended that initial failure and has become a force to reckon with in the music industry. He found massive success as the lead singer of Maroon 5, a pop-rock band he formed with some of the former members of Kara’s Flowers. We’ll help you celebrate the special day of this overcomer right here.

Adam Levine is a household name in the music industry. His silky high-falsetto voice and his dazzling masculine, tattooed body have won the hearts of millions of people all over the world. He has had his high and low moments, especially with the failure of his first band, but he persevered, and now he’s a famous rockstar. He was born on March 18, 1979, in Los Angeles, California. He is the son of Fredric Levine and Patsy Levine. His zodiac sign is Pisces. Levine is Jewish and describes himself as ‘spiritual but not religious.’ He credits his mother for starting him on his musical journey.

In 1994, Levine, along with his high school buddies, Jesse Carmichael, Mickey Madden, and Ryan Dusick, formed Kara’s Flowers, a garage band. The band released its first album in 1997; it was a commercial failure. Due to this, the band disbanded. Levine, along with Carmichael, moved to New York to pursue higher studies. They dropped out after a semester and reunited with former bandmates, Madden and Dusick, to form another band called Maroon 5. Their first album, “Songs About Jane,” sold over 10 million copies, making it the 10th best-selling album of 2004, two years after its release. They won two Grammy Awards in 2005 and 2006 consecutively. Maroon 5 released their most successful single, ‘Moves Like Jagger’ in 2010. It became an instant hit. In 2011, Levine joined the reality singing competition “The Voice” as a judge. He was on the show for eight years before he vacated the role in 2019.

Levine’s personal life is subject to extensive media coverage. He is married to the Namibian Victoria’s Secret supermodel, Behati Prinsloo and they have two daughters. Levine is an avid supporter of L.G.B.T. rights. His brother, Michael, is gay. He has A.D.H.D. and often advocates for mental health and the efficacy of therapy and medication. During the pandemic in 2020, he collaborated with Ferrari and Save the Children to raise funds to support education programs in the U.S.

He Forms Kara’s Flowers With His Friends

The band breaks up after the commercial failure of their only album: “The Fourth World.”

Levine reunites with his former bandmate and forms Maroon 5.

Maroon 5 wins their first Grammy Award for Best New Artist after the success of their first album.

His Band Wins Another Grammy Award

The band wins their second Grammy Award for Best Performance by a Duo or Group with Vocals.

He Becomes a Judge on "The Voice"

Levine joins the reality singing competition as a judge.

He Receives His Star

Levine receives a star on the Hollywood Walk of Fame for his contributions to the recording industry.

Why We Love Adam Levine

Who is Levine’s wife?

He is married to the Namibian supermodel Behati Prinsloo.

Does Levine have a child?

How many tattoos does Levine have? 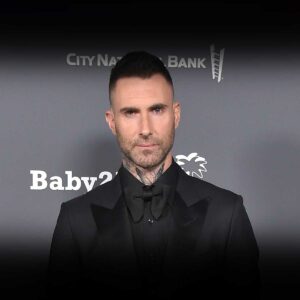