Our Lady of Guadalupe Day or Day of the Virgin of Guadalupe, on December 12, draws millions of Catholics every year from across Mexico and other countries to pay pilgrimage to see an image of Mary in the Basilica of Guadalupe. It is the site of her apparitions to Juan Diego Cuauhtlatoatz in 1531, now the most visited Catholic site in the world. Children are dressed in traditional costumes and are blessed in churches. Thousands of people come to church to pray. Guadalupe’s famous image, a brown-skinned woman in a starry blue mantle, hands folded in prayer, is cherished in Mexico. She is a remarkable part of believers’ daily lives — in their homes, churches, prayers, and community life. The day has been declared a national holiday in Mexico.

Even though it is a national holiday, most companies and organizations organize masses and feasts for their employees. On this day, people from all parts of Mexico make their way to Mexico’s religious center at the Basilica of the Virgin of Guadalupe, located in Villa de Guadalupe Hidalgo. This is a northern neighborhood of Mexico City where they celebrate the Nuestra Senora de Guadalupe with a mass ceremony and a fair in her honor.

History of Our Lady of Guadalupe Day

Day of the Virgin of Guadalupe is a story of miracles and faith that marks an important shift in the history of Mexico. The Spaniards, after they conquered Mexico, wanted to convert the indigenous Indians to Catholicism. But the Spaniards encountered many difficulties because the Mexican had their own faith and spirituality in which they strongly believed. However, indigenous people started to become fascinated with Catholicism when the story of the Virgin of Guadalupe and Juan Diego came to the fore.

According to tradition, Mary, mother of Jesus, appeared to Juan Diego, who was an Aztec convert to Christianity, on December 9 and again on December 12, 1531. Juan Diego was a young indigenous Indian who was walking toward the Hill of Tepeyac when he was stopped by an appearance of the Virgin Mary. According to Diego, the Virgin Mary was a young woman with black hair and dark skin who looked more like the women in his community. She ordered Diego to go to the Bishop and ask him to build a church at the Hill of Tepeyac. Diego then ran to the Bishop to tell him what the Virgin Mary had told him. The Bishop did not believe Diego at first and disregarded his request to build a church at the Hill of Tepeyac, demanding a sign before he would approve the construction of a church.

Mary then appeared a second time to Juan Diego and ordered him to collect roses. In a second audience with the bishop, Juan Diego opened his cloak, letting dozens of roses fall to the floor and revealing the image of Mary imprinted on the inside of the cloak — the image that is now venerated in the Basilica of Guadalupe.

Although the traditional view has been questioned by various scholars, defenders of the Virgin of Guadalupe — including Pope John Paul II, who canonized Juan Diego and declared Our Lady of Guadalupe the patroness of the Americas — accept the authenticity of the early documents and the various oral accounts of the apparition. Since 1556, a shrine devoted to the Virgin has existed in Tepeyac Hill.

Veneration of Our Lady of Guadalupe has been particularly strong among women, especially in Mexico, and since at least the early 18th century the devotion was spread throughout the world by the Jesuits and other religions. However, it’s not only limited to religious matters.

Our Lady of Guadalupe’s role has also played an important role in Mexican nationalism and identity. For example, in 1810, Miguel Hidalgo y Costilla promoted her as the patroness of the revolt he led against the Spanish.

During a religious revival in Mexico in the late 19th century, preachers declared that the foundation of Mexico could be dated to the time of the apparition of Our Lady of Guadalupe because she freed the people from idolatry and reconciled the Spanish and indigenous peoples in a common devotion. Her continuing significance as a religious and national symbol is attested by the hundreds of thousands of pilgrims who visit her shrine every year.

Our Lady of Guadalupe Day timeline

The Birth of Jesus

Jesus is born in Bethlehem.

The Fall of Jerusalem

According to tradition, Mary appears to Juan Diego twice, requesting a shrine to be built on the spot where she appeared and sending a sign of roses with her image imprinted inside of Juan Diego’s cloak.

After the story of Mary’s appearance to Juan Diego was codified in the work of Miquel Sánchez, an account in the indigenous language — Nahuatl — is published and widely accepted as accurate.

The Dogma of Papal infallibility is proclaimed.

An inspiration to many

During the civil war in Mexico, the banners of the rebels bore Our Lady of Guadalupe’s image with zeal and fervor.

The Queen of Mexico

Our Lady of Guadalupe is named ‘The Queen of Mexico and Empress of the Americas’ by Pope Pious XXII.

Our Lady of Guadalupe Day FAQs

What does Our Lady of Guadalupe symbolize?

It marks the date in 1531 when the Virgin Mary purportedly appeared to an indigenous Mexican, in the last of several apparitions. To the present day, Our Lady of Guadalupe remains a powerful symbol of Mexican identity and faith, and her image is associated with everything from motherhood to feminism to social justice.

Who is the angel under Our Lady of Guadalupe?

The woman is standing on the moon, indicating that she is greater than the god of night, the moon god. The “angel” at the bottom of the image was seen by the Indians as an “intermediary god” carrying in a new era, the beginning of a new civilization.

Is the Virgin Mary and Virgen de Guadalupe the same?

The Virgin of Guadalupe refers to when the Virgin Mary — the mother of Jesus and a very important saint in the Roman Catholic religious tradition — appeared to a man named Juan Diego in Mexico in 1531. She holds a special place in the culture and religious life of many Mexicans and Mexican Americans.

How To Observe Our Lady of Guadalupe Day

5 Amazing Facts About Our Lady Of Guadalupe

Why Our Lady of Guadalupe Day Is Important

Our Lady of Guadalupe Day dates 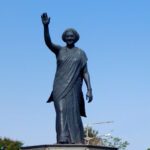