Stormi Webster, born on February 1, 2018, in Los Angeles, California, is the daughter of make-up mogul Kylie Jenner, and American rapper Travis Scott. Only four years old, this little superstar has already garnered more fame for just being herself, than most of us will in a lifetime. Constantly featuring on her mom’s Instagram dressed to the nines, Webster is always in full swag with outfits that put the rest of us to shame. The fashion icon has already set Twitter aflame several times and made headlines over the years with the internet falling in love with her personality.

Stormi Webster was born on February 1, 2018, in Los Angeles, California. She is the daughter of beauty mogul Kylie Jenner and rapper Jacques Berman Webster II, known to the world as Travis Scott. Stormi has one younger brother, Wolf. Despite her young age and the lack of a prominent social media presence (she only features on her mom’s Instagram account), she’s managed to amass quite the following – Stormi is clearly already winning at life. Applauded for her sunny disposition and overall good manners, the young trendsetter has been making a name for herself over the years.

One instance, in particular, that stood out to the world was when Stormi, aged two at the time, passed a challenge that was trending on social media with flying colors. The challenge, which surfaced in 2020, saw parents leave their toddlers unattended with candy, but not before asking them not to touch it. In the video challenge released by Kylie, Stormi could be seen chanting “Patience, patience…” when her mother left the room, as she resolved not to touch the chocolates that were right in front of her. She was commended by the internet for showing immense restraint despite her well-documented love of chocolate. This little mama is going places if you ask us.

It’s not just willpower that Stormi has got in spades. She’s also proven herself as a fashion icon, sporting everything from laid-back looks consisting of an oversized t-shirt and Nikes, to more extravagant bedazzled mermaid outfits. Stormi is constantly making headlines, and it doesn’t look like she’ll be slowing down any time soon.

The Star is Born

Stormi is born at 4:43 PM PST on February 1, and the world is changed forever.

Stormi is lauded for her good manners on Twitter when Kylie posts a video of the two of them baking cupcakes.

Having just been blessed with a baby brother, Stormi makes headlines yet again, as the internet commends the toddler for helping out with her baby brother.

Why We Love Stormi Webster

Stormi is actually derived from the word storm.

Why does Stormi have the last name Webster?

What is Stormi Webster’s middle name?

Kylie Jenner and Travis Scott did not give Stormi Webster a middle name. 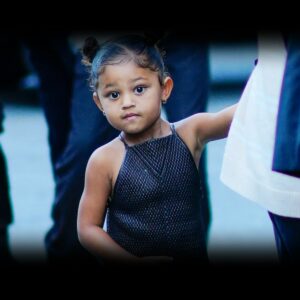