Robert De Niro was born on August 17, 1943. He is recognized as one of the greatest actors of his generation. His movie roles have won him multiple awards including an Academy Award for ‘Best Supporting Actor’ in “The Godfather Part II” (1974) and another Academy Award for ‘Best Actor’ for his performance in the film “Raging Bull” (1980). He is still acting today and shows no signs of stopping. Let’s celebrate this outstanding actor on his special day!

Robert Anthony De Niro Jr. was born on August 17, 1943, in Greenwich Village, New York. He is the only child of painters Robert De Niro Sr. and Virginia Admiral. De Niro is of Irish and Italian descent with a bit of French, Dutch, English, and German ancestry. He attended a public elementary school in New York. De Niro dropped out of high school at age 16 to pursue a career in acting. He went on to study acting with Stella Adler and at H.B. Studio.

De Niro’s professional acting career kicked off in 1963 when he acted in a small role in the movie “The Wedding Party.” He also performed minor roles in movies like “Encounter,” “Three Rooms in Manhattan,” and “Les Jeunes Loups.” He got a lead role in the satirical film “Greetings” in 1968. He acted in the crime film “Mean Streets” in 1973. In 1974, he played Vito Corleone in “The Godfather Part II” for which he won an Academy Award for ‘Best Supporting Actor.’ Also a filmmaker, he and film producer Jane Rosenthal founded TriBeCa Productions in 1989. He is especially known for his movie collaborations with director Martin Scorsese. In 2012, he earned an Academy Award nomination for his role in “Silver Linings Playbook.” De Niro never got tired of acting because in 2020, he made an appearance in the comedy film “Father of the Bride Part 3 (ish).” For his performance in “The Irishman,” he was nominated for a Critics’ Choice Award for best movie actor that same year.

De Niro was married to actress Diahnne Abbott from 1976 to 1988. After his divorce from Abbott, he married actress Grace Hightower; they were together from 1997 to 2018.

He Earns the Critics’ Nod

He plays the character Johnny Boy Civello in the crime film "Mean Streets,” for which he wins the National Society of Film Critics and the New York Film Critics Circle awards for ‘Best Supporting Actor.’

He wins an Academy Award for ‘Best Supporting Actor’ for his role as Vito Corleone in “The Godfather Part II.”

He wins his second Academy Award, this time for ‘Best Actor,’ for his role in "Raging Bull;" this movie also earns him a Golden Globe Award.

He earns an Academy Award nomination for "Silver Linings Playbook."

A Nomination for “The Irishman”

He is nominated for a Critics’ Choice Award for ‘Best Movie Actor’ for his role as a labor union leader in the crime epic “The Irishman.”

Why We Love Robert De Niro

What are Robert De Niro's most famous movies?

His most famous movies include “Raging Bull,” “The Godfather Part II,” “Goodfellas,” and “The Irishman.” 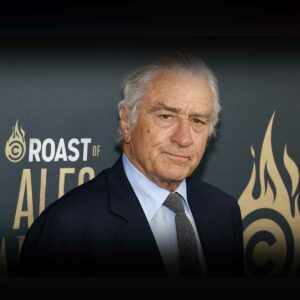