Anne-Marie Rose Nicholson, born on April 7, 1991, is an English singer whose career dates to 2013. Nicholson is an exceptional singer with a dreamy voice that’s best known for her amazing single ‘Rockabye’ with Clean Bandit and Sean Paul. However, she has continued to dominate the charts with her music and talent. Among other ventures, Nicholson is also a coach on “The Voice U.K.” This is why we’re celebrating her special day here!

Anne-Marie Rosie Nicholson, best known by her first name, is a great singer whose talent has set her apart. Nicholson is a phenomenal musician who has captured the hearts of millions with her unique voice, killer looks, and good heart. Nicholson was born in East Tilbury, Essex, on April 7, 1991. She is of English, and Irish descent and an Aries too. She grew up in a median-income home. Her father was a handyman, and her mother was a teacher.

Nicholson’s strides to success are commendable. In 2013 she made a solo demo for Rocket Records, called ‘Summer Girl.’ By 2015 she caught Rudimental’s attention and was asked to feature on some tracks for their album, “We the Generation.” The same year, Nicholson released her debut E.P., “Karate.” This E.P. paved the way for her debut solo performance. She then released ‘Alarm,’ the lead song from her debut album. This song was awarded a platinum certification in the U.K. In 2016, she was the lead vocalist on Clean Bandit’s ‘Rockabye’ alongside Sean Paul. The song was number one for nine weeks in a row and has been certified multi-platinum in several countries. She went on to release ‘Ciao Adios’ in 2017, ‘Heavy’ in 2018, and ‘Then’ in 2019 before releasing her debut album in April 2018.

Nicholson has a long list of hits to her name. From ‘2002’ with Ed Sheeran to ‘Don’t Leave Me Alone’ with David Guetta to ‘Birthday,’ among others. She was on the soundtrack for the third season of “13 Reasons Why” and joined the 10th season of “The Voice U.K.” as a coach alongside Meghan Trainor. Her list of accomplishments is seemingly infinite. To say she is talented is an understatement, and her achievements speak for themselves. Nicholson celebrates her accomplishments with her friends and family. She is currently single, has never married, and has no children.

She Features On Rudimental’s Album

She features on four tracks on “We the Generation.”

Nicholson is the main vocalist on this track, which becomes a massive success.

The album titled “Speak Your Mind,” drops in April.

She Releases Her Documentary

Her documentary, “How to Be Anne-Marie,” drops via YouTube Originals.

She Drops Her Second Studio Album

Why We Love Anne-Marie

Is Anne-Marie married to Ed Sheeran?

Where does Anne-Marie live now?

She currently resides in Essex.

Does Anne-Marie have siblings?

Marie has just one sibling, her sister — Samantha. 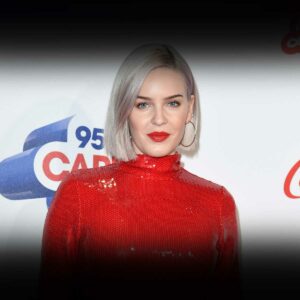