World Quark Day is on January 19, a special day set aside to celebrate the delicious cheese known as quark – sometimes spelled ‘quarg.’ It’s mild, creamy, and much better for your health than regular cheese, so what’s not to like? Quark is an incredibly versatile food and ingredient that you can throw into sweet and savory recipes in place of cheese. It goes well with just about everything and is perfectly delicious eaten on its own too.

Quark, or quarg, translates to ‘curd cheese.’ Depending on what part of Europe you’re in, it may not even be considered cheese at all. No matter what it’s called, quark is a mild, creamy, and delicious cheese-like food. The flavor and texture are very similar to the Fromage blanc from France, or the paneer from India. But unlike similar South Asian cheeses that use yogurt, quark is made out of soured milk and fermented.

While some preparations of quark can have fat content up to 40%, for the most part, quark has a very low-fat percentage of around 10%. This low-fat content makes it an incredibly healthy replacement for regular American cheese spread. Protein makes up the rest of the quark, a fantastic source of protein for vegetarians. It has about 3.5% protein per mass, which is double the amount of protein in Greek yogurt.

The Queen of Quark is a German woman whose name is unknown. She lives in Bavaria and is a quark enthusiast. A huge fan of healthy eating and good diets, the Queen of Quark decided to celebrate World Quark Day so more people could get to know about this European superfood. She has written a cookbook with many recipes and teamed up with a New York farm to celebrate and share her love of quark with America.

Quark can be made at home by heating some buttermilk, or a mixture of buttermilk and milk, to 200 degrees in a slow cooker and leaving it for a couple of hours. Then you switch off the gas and leave the milk to ferment overnight. Next, sieve the curds through cheesecloth and let it hang for a couple of hours, and you’ll have your fresh quark!

Tacitus, a Roman historian, makes note of a curd cheese like quark in his book "Germania."

The Word is Used

All quark is homemade, with no industrial production existing.

The Queen of Quark decides that a day is needed to spread information about quark to the world.

Can you make quark at home?

Quark is really easy to make at home, and earlier, people only made it at home. Industrial production of quark only started after the 1900s.

Is quark the same as Greek yogurt?

It is not the same as greek yogurt; it is also not cottage cheese. Although these are the two main foods people compare quark with, it is a creamy German-style cheese product with a similar consistency but less acidic taste than greek yogurt.

Yes, it is. Containing phosphoric acid, quark can work against inflammation.

5 Facts About Quark That You Won’t Believe

Why We Love World Quark Day 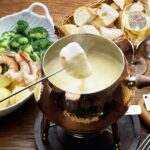