When Neil Armstrong stepped down onto the moon’s cratered surface with the words, “That’s one small step for man, one giant leap for mankind, ” every nation on earth seemed to breathe a collective sigh of relief.  National Moon Day celebrates not only the historic lunar landing on  July 20, 1969, but the day also reminds us of the uphill slog to get the space program literally off the ground. On National Moon Day, we remember both the quirky and profound moments in the space race that ended with the Americans being the first to plant their flag on the moon.  Stick around— the story is fascinating!

“One small step for man, one giant leap for mankind” is celebrated on National Moon Day on July 20.

American astronauts Neil Armstrong, and Edwin ‘Buzz’ Aldrin became the first humans in history to land on the Moon on July 20, 1969. The grand Apollo 11 mission took place eight years after the national goal announcement by President John F. Kennedy to send a man to the moon by the end of the 1960s.

The idea for the mission to send astronauts to the moon started when President Kennedy appealed to a special joint session of Congress in 1961, stating “I believe this nation should commit itself to achieving the goal, before this decade is out, of landing a man on the moon and returning him safely to Earth.”

At the time of Kennedy’s proposal, the United States was still head-to-head with the Soviet Union in advancements in space exploration and, since it was during the time of the Cold War, the proposal was welcomed. The first unmanned Apollo mission was initiated by the National Aeronautics and Space Administration, NASA, after five years of effort and hard work by their international team of engineers and scientists. The first mission served as a testing phase for the structural resilience of the launch spacecraft vehicle.

At 9:32 A.M. on July 16, 1969, the whole world witnessed Apollo 11 take off from Kennedy Space Center with three astronauts on board. Neil Armstrong was the commander of the mission. The spacecraft entered the lunar orbit after three days, on July 19. The lunar module, Eagle, disengaged from the main command module the next day, manned by Armstrong and Aldrin. When Eagle touched the lunar surface, Armstrong radioed his historical message to Mission Control in Houston, Texas: “The Eagle has landed.”

At 10:39 P.M., Armstrong exited the lunar module and made his way down its ladder. His progress was being recorded by a television camera attached to the module, transmitting signals back to Earth, where the world was watching with bated breath.

At 10:56 P.M., Armstrong stepped on the moon’s powdery surface, and spoke his iconic words: “That’s one small step for man, one giant leap for mankind.”

In a historic speech on May 25, President John F. Kennedy signals the start of NASA's Apollo space program as well as his plan to see an American on the Moon by the end of the decade.

First Images of the Moon's Surface

For the first time, American TV viewers get to view the Moon's cratered surface from images transmitted by NASA's unmanned probe, Ranger 7.

10 Times Around the Moon

NASA's Apollo 8 orbits the Moon 10 times as the first manned flight while Americans watch on television.

Apollo 11 Lands on the Moon

The world breathlessly watches as Apollo 11's three-man team becomes the first humans to step onto the Moon's surface.

The Apollo Program Comes to an End

NASA shuts down its Apollo program with a final manned landing — Apollo 17.

No matter how many years pass, we will always be in awe of the first moon landing in 1969. Landing on the moon was a huge step for mankind and our understanding of the great realm we exist in. Traditions for National Moon Day include watching documentaries and reading books on the Apollo 11 mission, moon watching, and marveling at its glorious luminescence at night.

Space enthusiasts bring out their telescopes to gaze at the moon and they read up on NASA’s upcoming projects and missions. National Moon Day is also prominently celebrated in schools, with the moon being the main topic in classes to educate children on the historical event.

National Moon Day is also especially important for those interested in astrology and astronomy. The positioning of the moon, its effect on Earth, and the planetary moons are greatly discussed and delved into today.

5th – the ranking of our Moon’s size compared to others in our solar system.

14.6 million – the number of square miles of the surface area of the Moon.

30 – the number of Earth-sized planets that could fit between the distance of the Earth and the Moon.

2300 mph – the traveling speed of the Moon orbiting the Earth.

1 inch – the distance the Moon drifts farther from Earth every year.

16.5% – the percentage decrease in a human’s weight on the Moon.

12 – the number of men who have walked on the Moon.

1950s – the period when the U.S. proposed detonating a nuclear bomb on the Moon.

30 seconds – the amount of time in terms of fuel that was left when Neil Armstrong landed on the Moon.

What day is Moon Day?

National Moon Day is on July 20 every year, commemorating Astronaut Neil Armstrong’s landing on the moon.

Why do we celebrate Moon Day?

National Moon Day marks the day in history when man landed on the moon for the first time. On July 20, 1969, Apollo 11 carried two Astronauts to the surface of the moon.

Is the flag still on the moon?

Since the nylon flag was purchased from a government catalog, it was not designed to handle the harsh conditions of space and has somewhat disintegrated.

Why We Love National Moon Day 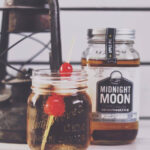