We celebrate International Chess Day on July 20, a day that was born from an idea the United Nations Educational, Scientific, and Cultural Organization (UNESCO) had. Chess lovers around the world celebrate their favorite game on this day each year, in a tradition spanning more than 50 years.

The origins of chess are a matter of debate. Multiple theories attribute the beginning of this game to countries like India, China, Russia, and Central Asia.

A popular theory credits the Indian war game — ‘chaturanga’ — as the inspiration for chess. People regard this as the precursor of chess as it had two key features found in later chess variants — different pieces had different functions and the victory was based on one piece (the king, in modern chess). Versions of this game reached the east, north, and west, taking on very different characteristics each time. A version of chaturanga or a later variant called ‘shatranj’ made its way into Europe through Persia, the Byzantine Empire, and the Arabian Empire.

It is believed that the reason chess pieces do not have distinctively human/animal features is because of the Islamic influence. Islam religion forbids making statues of people or animals, so this is probably why chess pieces are so vague looking.

The expanding Arabian empire took chess to North Africa, Sicily, and Spain by the 10th century. At the same time, chess was being spread around the globe, Eastern Slavs took it to Kievan Rus’ and the Vikings brought the game to Iceland and England.

Chess’s popularity can be attributed to the fact that it was associated with wealth, knowledge, and power. It evolved to resemble the current version of chess in England by the 15th century.

The game as we know it was soon established by an Englishman, adopting the black and white squares we know so well. Modern history shows many events and competitions in relation to chess and exciting new variations of the game, which added to chess’s popularity. Further advancements soon made this game what it is today — reliable timing mechanisms came around, rules of play were put into effect, and charismatic world players burst onto the scene.

The Indian war game ‘chaturanga,’ which is remarkably similar to chess and is sometimes seen as its precursor, is played across northwestern India.

A manuscript from this age shows a record of a chess game between a Baghdad historian and his pupil.

The game spreads across continents, increasing in popularity — it is known as the royal game in England.

A series of six matches are held between the leading French and British players, Louis-Charles Mahé de La Bourdonnais of Paris and Alexander McDonnell of London — Bourdonnais wins and this event is analyzed and reported extensively.

An Englishman, Nathaniel Cook, establishes a standard design for the chess game set.

After the new standard chess set is patented, famous player Howard Staunton endorses it, thus resulting in it being called the 'Staunton pattern' — even today, only sets based on this design are allowed in international competition.

Chess players are now being timed reliably — the mechanism to do so is introduced in this period.

A Special Organization Comes into Being

The International Chess Federation (FIDE) is established in Paris.

Our Day is Celebrated

National Chess Day is celebrated on the second Saturday in October each year.

What is the full form of FIDE?

FIDE is officially called the Fédération Internationale des Échecs but is translated to the International Chess Federation.

Which country is strong in chess?

FIDE rankings put Russia at the top, with the U.S. coming in second place, and China in third.

How To Celebrate International Chess Day

Why We Love International Chess Day 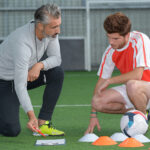