Kevin Bacon, born on July 8, 1958, was a theater major from Philadelphia who has had a famous career of immense success. Only a few people can strike that balance throughout 40-plus years of acting roles. Bacon is a well-known actor who has appeared in films such as “Footloose,” “A Few Good Men,” and “Crazy, Stupid, Love.” On T.V. shows, Bacon has also been recognized for his part as Ryan Hardy on Fox’s “The Following,” which was a huge success from the get-go. Together, we will celebrate the birthday of this legend.

Kevin Bacon was born in Philadelphia, Pennsylvania, on July 8, 1958, to Edmund Bacon, an architect and urban planner, and Ruth Hilda Holmes, a teacher. He is the youngest of six children. Bacon was drawn to acting at a young age and attended the Pennsylvania Governor’s School for the Arts, Philadelphia’s Manning Street Actor’s Theatre, and New York City’s Greenwich Village’s Circle in the Square Theatre School. Since 1988, Bacon has been married to actress Kyra Sedgwick, whom he met on the set of the P.B.S. adaptation of Lanford Wilson’s play “Lemon Sky.” The two have featured in other projects, namely “Pyrates,” “Murder in the First,” “The Woodsman,” and “Loverboy.” The couple has two children and they live on Manhattan’s Upper West Side.

His debut as the strict Chip Diller in “National Lampoon’s Animal House” in 1978 almost seems like an inside joke. “Diner,” from 1982, became the turning point for the actor’s career. Then came the part of rebellious city teen Ren McCormack in 1984’s “Footloose.” He waged war on a rural town for prohibiting rock music and dancing and Bacon will always be renowned for his dance moves as his character. In 1990, he had greater success with the horror movies “Tremors” and “Flatliners” before starring as a gay hustler in Oliver Stone’s “J.F.K.”

Consequently, the actor co-starred with seemingly everyone in Hollywood: Jack Nicholson, Tom Cruise, Meryl Streep, Tom Hanks, Sean Penn, Tim Robbins, and Robert De Niro. In 1999, Bacon later returned to horror films with “Stir of Echoes” and “Hollow Man.” He demonstrated his knack for playing dark, disturbed characters in the critically praised “Mystic River” in 2003. Bacon subsequently reunited with his other half as director of “Lover Boy” in 2005 before starring in “Frost/Nixon” as a critical supporting character. The actor then starred alongside Amanda Seyfried in the haunted house horror film “You Should Have Left” in 2020, his first big-screen performance in four years.

He Starts His Acting Journey

He begins to act by taking part in a theater performance at the age of 17.

“Friday the 13th,” directed by Sean S. Cunningham, is a huge commercial success.

He Wins a Golden Globe Award

He wins Best Actor in a Miniseries or Motion Picture Made for Television for his role in “Taking Chance.”

Bacon is nominated for Favorite Crime Drama Television Actor for “The Following.”

Why We Love Kevin Bacon

What is Kevin Bacon's biggest movie?

According to critics, “Apollo 13” is Bacon’s best movie.

What are Six Degrees of Bacon?

Six Degrees of Kevin Bacon, often known as Bacon’s Law, is a game in which players compete to pick an actor at random and then connect them to another actor via a film in which both actors have acted together until they get Kevin Bacon — they always get to him within six people.

How old was Kevin Bacon in "Footloose?"

Bacon was 24 years old at the time. 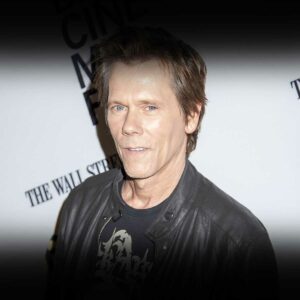