Elliott Smith, a gifted musician, and vocalist was born on August 6, 1969, and rose to popularity with his song ‘Miss Misery,’ which was featured on the soundtrack of the Hollywood film “Good Will Hunting.” He took advantage of his voice’s specific characteristics by generating separate vocal layers and harmonies. After many years of fantastic performances with the band Heatmiser, Smith decided to go solo while still a member. He acquired greater success and fame as a solo artist, which surpassed the success of his band, prompting him to quit the band and concentrate on his solo career. We celebrate him and his remarkable legacy on his special day.

Steven Paul Smith, popularly known as Elliott Smith, was born in Methodist Hospital in Omaha, Nebraska, to Gary Smith, a University of Nebraska Medical Center student, and Bunny Kay Berryman, an elementary school music teacher. Smith’s parents split when he was six months old, and he relocated to Duncanville, Texas, with his mother. He began playing the piano at an early age and learned to play the guitar at the age of 10. He also began writing original songs, for which he won an award at an arts festival. He then moved to Oregon with his father. As a disturbed adolescent from a dysfunctional home, he began misusing drugs and alcohol. At this time, he also started learning music as a vocation and decided to record his music on a leased recorder. As a student at Lincoln High School, he sang, played a variety of instruments, and occasionally sang for the bands Stranger than Fiction and A Murder of Crows. Despite his family’s volatility, he excelled in school and was designated a National Merit Scholar when he finished. In 1991, he graduated from Hampshire College in Massachusetts with a bachelor’s degree in philosophy and political science.

Smith met Neil Gust during college, who shared his goal to pursue a career in music. With bassist Brandt Peterson and drummer Tony Lash, the duo formed the alternative rock band Heatmiser in 1991. The band released a six-song Extended Play (E.P.) of demo material in 1992. It was a limited-edition release, and some of the tracks were eventually re-recorded for Heatmiser’s following album. “Dead Air,” Heatmiser’s debut album, was released in 1993. Their music included bright and energetic melodies, as well as melancholy and dismal singles. On their debut album, Smith’s song ‘Still’ was featured. The band released the (E.P.) “Yellow No.5” in 1994. The E.P.’s wide and unique approach was appreciated by music critics. Smith multiplied his income by doing odd jobs. In 1994, Smith started pursuing a solo career. His debut album as a solo musician was titled “Roman Candle.” The album garnered positive reviews. The sadness of Smith’s rough upbringing was reflected in many of his songs. Smith’s second solo album, “Elliott Smith,” was released in 1995, following the success of his debut solo album. Dark tunes were featured with minimal background music. “Mic City Sons,” Heatmiser’s most recent album, was released in 1996. It was appreciated for its song diversity and had a pop tinge to it.

Tensions between the members of the band were building, and the band disbanded before their last album was issued. In 1996, director Jem Cohen shot an 11-minute video of Smith singing acoustic tunes, which he published in 1997. The film’s title was “Lucky Three: an Elliott Smith Portrait.” On his 1997 album “Either/Or,” he played a variety of instruments. The songs were described as his “greatest ever” in a music review. Smith wrote the lyrics and composed the music for ‘Miss Misery,’ a song that was featured on the soundtrack of the popular film “Good Will Hunting” in 1997. He was nominated for an Academy Award for Best Song. He became despondent and contemplated suicide despite his professional achievements. He recorded two more albums during his career: “XO” (1998) and “Figure 8” (2000). Both albums were commercially successful. He was working on an album called “From a Basement on the Hill” when he died.

Smith was never married and lived with his girlfriend Jennifer Chiba until his death. He had a terrible personal life, plagued by depression, drug addiction, and drunkenness. He tried rehab multiple times but found it ineffective. In 2003, he decided to stop drinking and using psychotropic medicines on his own. On October 21, 2003, he died from suicide. At the time, he was only 34 years old. When Smith was cremated, his ashes were shared among his mother, father, and half-sister Ashley. According to a small memorial service held at his father’s home in Portland for relatives and friends, Smith’s “ashes weren’t on hand since the coroner wouldn’t release them.” Smith’s ashes have not been made public, nor has the condition of his remains been revealed.

He Forms the Band Heatmiser

Elliot Smith starts the band Heatmiser with classmate Neil Gust while at Hampshire.

He Receives an Academy Award Nomination

For his song ‘Miss Misery,’ he receives an Academy Award nomination for Best Song.

He Has a Posthumous Release

"From a Basement on the Hill," his final album, which was unfinished at the time of his death, is released posthumously and becomes one of his most successful releases.

Why We Love Elliott Smith

Was Elliott Smith an addict?

Smith’s substance addiction included heroin, alcohol, and crack cocaine, among other substances. Despite his heavy use of these narcotics, Smith was able to put out a lot of albums in his short career.

His main acoustic guitar was a Yamaha.

Smith’s influences date from the dawn of more classic pop and rock, with apparent nods to The Beatles, as well as Nick Drake, Nico, and Bob Dylan. His rockier work was also influenced by British bands such as Oasis and The Who. 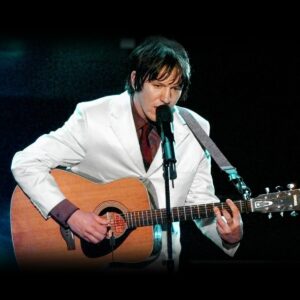