Captive Nations Week has been proclaimed for the third week in July every year since its inception and is taking place from July 11 this year. During the Cold War, a captive nation was one that was ruled by communists, particularly by the Soviets. While there is no Soviet rule anymore, there are nations that are still under the control of non-democratic governments and this week-long official observance aims to raise public awareness of the issues that are faced by these nations.

Captive Nations Week was declared by a Congressional resolution in 1953 and was aimed at creating awareness of the Soviet occupation of the countries in Eastern Europe and the Soviet imposition of support to Communist regimes.

The resolution was later signed into Public Law 86-90 by President Dwight D. Eisenhower. Lev E. Dobriansky, a renowned anti-communist advocate is credited for playing a pivotal role in the Captive Nations committee. He was the son of Ukrainian immigrants and spent his life advocating for freedom for people under communist rule. He has also served as a U.S. ambassador, professor of economics, writer, lecturer, and global strategist. He created a text for the captive nations law, which eventually translated into Captive Nations Week. However, after the collapse of communist regimes in Eastern Europe, the week now extends support to the newly democratic governments of these countries.

Since its inception, every U.S. President has declared the third week of July as Captive Nations Week. The week-long observance sees participation from diasporas from undemocratic countries and seeks to draw attention to the problems surrounding democracy and human rights. In the recent past, members of the Belarusian American community have been a major part of the participants in Captive Nations Week marches. There has now also been a call for the resurrection of Captive Nations Week as several countries are still dominated by authoritarian and totalitarian communist regimes.

Captive Nations Week is a time for everyone to come together and unite to create a better and safe place for each citizen living in any part of the world.

Marion Smith, Executive Director of the Victims of Communism Memorial Foundation, calls for a resurrection of Captive Nations Week.

Where is Captive Nations Week celebrated?

Captive Nations Week is a week-long observance, mainly in the United States.

How can I show solidarity towards captive nations?

You can show solidarity to the Captive Nations cause by advocating for the rights of global citizens to live a free life, championing democracy via learning and educating others, and signing petitions.

What are the captive nations?

Some of the countries identified as captive nations in the original Public Law 86-90 include Poland, Hungary, Ukraine, Romania, Tibet, and Azerbaijan, to name a few.

How to Observe Captive Nations Week

Why Captive Nations Week is Important 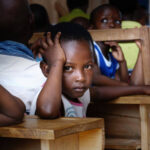 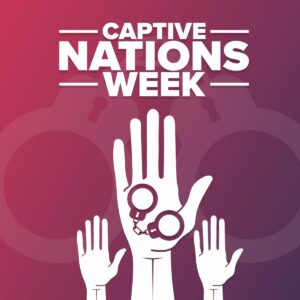