Damian Lillard, born in Oakland California on July 15, 1990, is a basketball player who has achieved a lot during his career, dominating the basketball court and fans’ hearts since his professional career began back in 2015. Lillard had a love for basketball from the time he was young, and during his youth, he used to practice with friends at the local basketball court. Today, as we celebrate this star on his birthday, we look back at all that he has achieved over the last few years and how he became so successful within the world of basketball!

Damian Lillard was born on July 15, 1990, to parents Gina and Houston Lillard in Oakland, California. He has both a brother and a sister and he attended St. Joseph Notre Dame High School and Oakland High School, which offered him the chance to get more time on the court. When Lillard was younger, he always had a love of basketball and would regularly enjoy a game or two with his friends at the local basketball court. After completing high school, Lillard was offered a scholarship to Weber State University, where he attended and played basketball up until he completed his degree in sales in 2015. Lillard achieved great success there and led the Weber State Wildcats team to victory on many occasions.

Lillard’s professional career began in 2012 when he was signed by the Portland Trail Blazers and did very well right off the bat, earning him the title of N.B.A. Rookie of the Year for 2012. He continued to achieve great results in his second and third seasons for the team and in 2015 he signed a $120-million contract with the Trail Blazers for the next five years. Along with signing this massive contract, Lillard also expanded his brand into the music industry and released his debut single ‘Soldier in the Game.’

His exceptional skills on the court meant that Lillard was slowly becoming one of the top basketball players around and in 2017 his skills were awarded as he received the Magic Johnson Award, given to players who are skilled on the court and graceful while dealing with the press. In 2021, Lillard married his college sweetheart Kay’la Hanson with whom he has three gorgeous children.

He Signs with the Portland Trail Blazers

His start in the N.B.A. comes when he signs a contract with the Portland Trail Blazers.

He Re-signs With the Portland Trail Blazers

In a $120-million contract deal, Lillard decides to stay with the Trail Blazers for the next five years.

Besides being an outstanding athlete, Lillard starts making his way into the world of music.

He Wins the Magic Johnson Award

For his exceptional skills on the court and his great interactions with the press, Lillard is awarded the Magic Johnson Award.

Why We Love Damian Lillard

How many 50-point games does Damian Lillard have?

What does Damian Lillard's tattoo say? 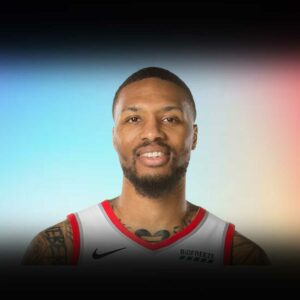