A missing dog need not be lost forever, and National Lost Dogs Awareness Day on April 23 helps make that a reality. This day was created to support the efforts of organizations that are involved in finding missing pets and help bring those that have strayed too far, back to their worried families. It was created by the directors of Lost Dogs Illinois, Wisconsin, and Texas respectively who have helped lost dogs find their way home since 2014.

Our pets are our friends and companions, because of this, they should be protected. Our dogs, as playful and loyal as they may be, are equally as curious and sometimes their adventures lead them to wander too far from home.

Every two seconds, a pet in the U.S. becomes lost, and one-third of all dogs in America are reported missing at least once in their lifetime. Some research indicates that 80% of those lost pets are never reunited with their families, with the majority being placed in shelters and eventually euthanized.

There are different ways to prevent your dog from getting lost in the first place and ensure their safe return home if they do. Some of these are; making sure your home is fenced or that your dog is always on a leash when outside. It is recommended that you tag your pet, microchip them, and also keep their records (which include your current contact number and address) updated. In the unfortunate case that your pet has gone missing, there are several organizations whose sole mission it is to find and return lost pets. One of them is the Lost Dogs of America, who are also credited with creating this day.

Henry Bergh establishes The American Society for the Prevention of Cruelty to Animals (A.S.P.C.A.)

The very first animal shelter is built in the U.S.

The Lost Dogs of America is founded.

Do police look for lost dogs?

Your local police station can help find your missing dog. File a complaint with them and they will keep an eye out for stray dogs that may fit your description.

How many missing dogs are reunited with their families?

Only a small percent of lost pets end up being returned to their families. On average, only 15% to 20% of lost dogs are reunited with their owners.

5 Surprising Facts About Missing Pets You Should Know 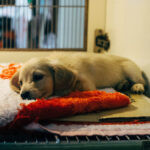