National Jimmy Day is celebrated on June 20 each year. Jimmy is a common male first name in English-speaking nations and is a short form of James. Jimmy is also associated with the Greek name Dimitris, as well as the earlier Demetrios or Demetrius. Many Greek immigrants in Anglophone countries name their boys Jimmy, after Jimmy the Greek, a well-known American sports pundit, and Las Vegas bookmaker. It’s also a popular name among people of Scottish or Irish origin, such as the 39th President of the United States, Jimmy Carter.

Jimmy Carter was born James Earl Carter on October 1, 1924. The descendant of U.K. immigrants turned Georgia cotton farmers, Carter grew up in the town of Archery, which impoverished African American families dominated. Despite his father being pro-segregation, Carter freely interacted with the neighborhood children. As Governor of Georgia, he embarked on a racial tolerance campaign, advocating for civil rights despite backlash from his segregationist constituents. His position as an outsider of the political establishment and Richard Nixon’s Watergate scandal contributed to his popularity as a national leader. He won the election in 1977 to become America’s 39th president. One of his most significant achievements was the Camp David Accords, which helped ease Cold War tensions and stabilized relations between the U.S. and the Soviet Union.

British comedian Jimmy Carr is known for his deadpan delivery and dry sarcasm, which has earned him praise and criticism in equal measure. Born to Irish immigrant parents on September 15, 1972, Carr launched his comedic career in the late 1990s with stand-up routines at local bars and clubs. He graduated to television shows in the early 2000s, breaking into the American market as the host of “Distraction” on Comedy Central. Carr also appeared on “Late Night with Conan O’Brien” twice and on “The Tonight Show with Jay Leno” three times.

One of the most significant internet sensations and stars to come out of YouTube is Jimmy Donaldson, better known by his YouTube name, Mr. Beast. Donaldson started his career online at 13, posting gameplay videos and clips where he estimated the net worth of other YouTubers. In 2017, after five years of churning out content, he went viral after a video of him counting to 100,000 racked up thousands of views overnight. Donaldson refined his content to charity videos and challenges as his audience grew, recruiting childhood friends to help manage the brand. By 2020 he was among the highest-paid content creators on YouTube, and as of July 28, 2022, he has a staggering 100 million subscribers on his main channel.

The Start of Something Amazing

Passing on the Baton

What is the personality of Jimmy?

Jimmy is a name that evokes logical reasoning. You are possibly intelligent, intuitive, graceful, and even a psychic. Interest in spirituality and mysticism is a strong possibility in your quest for truth. Sometimes you are not friendly and do not like to spend time with other people.

Is Jimmy a well-known name?

When was Jimmy a popular name?

Jimmy peaked in popularity in the 1930s.

Why We Love National Jimmy Day 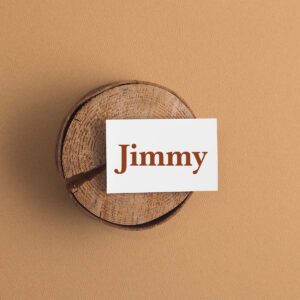